In his third book, Earth in Human Hands, astrobiologist David Grinspoon ’82 takes on some of the weightiest and thorniest issues we confront. It’s a bleak journey at times—replete with visions of catastrophic climate change and Earth-pummeling comets—but Grinspoon is irrepressibly optimistic about human ingenuity and wisdom. 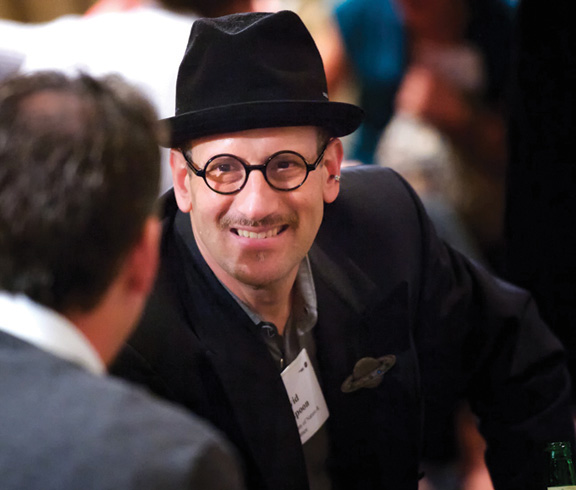 "The delusion we may need to shed is that we can avoid the responsibility ... of running this planet," Grinspoon says.

The book deals with the very existence of the human race, not to mention big ideas in chemistry, biology, geology, and astrophysics. Yet Grinspoon, who has appeared as a guest and guest host for popular scientist Neil deGrasse Tyson’s shows and fronted a “psychoastrobiofunkiliscious” music band in planetarium performance pieces about space, has a remarkable way of conveying complicated truths in entertaining and understandable ways. Writing about greenhouse gases, for example, he describes their component molecules as having “arms-a-flying, twirling-hippy-dancing-to-Phish kinds of vibrational motions.”

A senior scientist at the Planetary Science Institute and a professor at the University of Colorado, Grinspoon has, like a comet, traveled far since his days on College Hill. He writes that Brown provided “my first taste of real scientific research” when, the summer after his freshman year, he helped planetary geology professor Tim Mutch (who vanished while climbing in the Himalayas in 1980) study samples taken from Mars by Viking landers. “Yes,” Grinspoon says, “my job was counting rocks, which sounds like a parody of a boring occupation. But these rocks were on Mars!”

In Earth in Human Hands, Grinspoon dives into the controversy over designating a new geologic epoch—called the “Anthropocene”—to affirm that humans are having a profound, lasting, and potentially devastating impact on the Earth. He acknowledges that some people aren’t willing to embrace the concept of the Anthropocene, even as plastic waste and radiation from nuclear bomb testing leave a permanent fingerprint on Earth. The idea, he writes, has been labeled “arrogant” and “narcissistic” and has spurred suggestions that the designation is largely motivated by the politics of climate change.

“We have to come to grips with our own significance,” Grinspoon counters. “We’ve entered an age where we are radically changing the plotline, to the point where we cannot see nature clearly if we insist on ignoring our own growing role. . . . The delusion we may need to shed is that we can avoid the responsibility of, in some way, running this planet.” Humans, he argues, need to plot the course through the Anthropocene or risk going the way of the dinosaurs, as well as permanently scarring Earth.

Grinspoon calls for concerted investments in research and technology and for greater social and political prioritization of such human-induced problems as fossil fuel emissions, habitat destruction, and ocean acidification. As an advocate of space exploration, however, he goes further. The long-term survival of the human race—and of all life on Earth—may depend on such things as learning to track and deflect asteroids and exploring space with the view to one day colonizing other planets.

“For all we know,” Grinspoon says, “we could be determining the future of all life.”

Reader Responses to Planet in Denial