Most accounts trace the history of women’s hockey at Brown back to a men’s hockey practice in 1964. That’s the year when Jim Fullerton, the men’s coach at the time, invited Nancy Schieffelin ’67 to suit up in a men’s uniform and show the unsuspecting men players what a woman could do on the ice. After word of the exhibition got around, other women students who played hockey joined together and eventually raised enough money to support a women’s team that became the basis of the first women’s collegiate ice hockey program in the United States. In a March 9, 1966, editorial, the Brown Daily Herald dubbed the women the Pembroke Pandas. 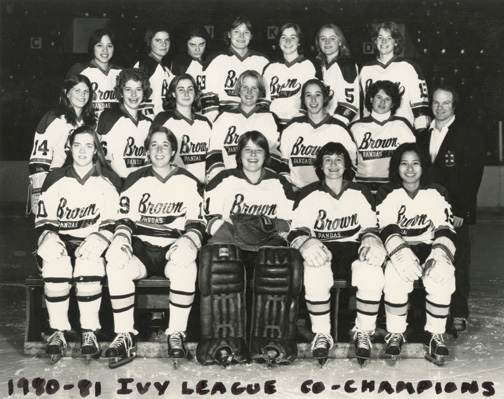 Panda's goalie Jan Moody '83 (first row center) was named the Ivy tournament's Most Valuable Player for making save after save and refusing to allow a late tiebreaking goal by the dominant Cornell squad.
No coach has had as much of an impact on Brown women’s hockey as Digit Murphy, who retired in 2011 after twenty years as head coach. Murphy, who still holds the record for most wins in Division I women’s ice hockey, coached her team into the national championship game three times and into the semifinals four times. Her players also won five Ivy titles and six ECAC regular-season or tournament titles. They have been Olympic competitors and frequent All-Americans.

Even after 318 games as head coach, however, Murphy says one of the most exasperating games in her career came as a player, during her extraordinary years as a student-athlete at Cornell. It came in 1981, five years after the Pandas had faced Cornell in the final of the first-ever Ivy League women’s ice hockey tournament—a game won 3–2 by the Big Red.

Cornell was the league’s dominant power in 1981, having won the past five Ivy championships, and Murphy—who was then Margaret Degidio—was the team’s leader and a star sophomore forward. Her goal as the final approached was to beat the team she would later coach so successfully and win another Ivy League title for Cornell.

The championship tournament was held at Harvard’s Bright Hockey Center in Cambridge. Cornell, given a first-round bye, cruised past Dartmouth, 5–0, in its semifinal. Brown advanced by beating Yale, 7–2, and Princeton, 3–2. In the final, held on February 28, the Pandas took the lead on a goal by Pam Boone ’82 at 3:26 of the first period. Cornell’s Diane Dillon quickly evened the score and netted another goal in the second to put her team ahead.

But then the Big Red defense faltered. Brown scored three straight goals, and the Pandas’ outstanding goalie, Jan Moody ’83—who would be named MVP of the tournament—was making save after save. With six minutes to go in the game, Brown held a 4–2 lead.

Then Degidio stole the puck and broke into the offensive zone, scoring an unassisted goal that pulled her team closer. Things looked good for Brown when the Pandas went on a power play, but a shorthanded goal by the Big Red at 18:03 knotted the score. The goalies refused to budge after that, and the buzzer sounded with the score deadlocked at 4–4.

Neither team scored in the first ten-minute overtime period. Or in the second. Or in the third. The sound of the coaches shouting instructions echoed through the building, and the players struggled to keep their heavy legs moving. Excitement turned to exhaustion. “We were amped up at first, but it went on and on and on,” recalls Cornell’s Dillon. “It was hard to keep focused.”

Brown coach Steve Shea ’73 and Cornell coach Bill Duthie met before the start of the fourth overtime period. If neither team scored, they agreed, they would end the game and finish as co-champions. And that’s what happened. “We were disgusted,” says Murphy, who was named the Ivy League Player of the Year that season. “We were disgusted because they wouldn’t let us finish the game. As an athlete, I felt cheated. There was some thought, I guess, that women couldn’t handle it. It was ridiculous.”

Even after Digit Murphy’s lengthy and celebrated coaching career at Brown, she says it still bothers her when she sees the photograph of the two teams being presented the trophy as Ivy League co-champions. “That picture haunts me to this day,” she says. “There was no question in my mind that we were going to win that game.”

Reader Responses to Stalemate on Ice