After being rejected as a player on defense by the lowly Cleveland Browns and then bouncing around with the likes of the Oklahoma City Yard Dawgz and the Florida Tuskers, James Develin ’10, a mechanical engineering concentrator at Brown, switched to fullback and eventually earned a spot on the New England Patriots practice squad before moving to the active roster three years ago. In February, Develin won his second Super Bowl. “I don’t think there’s a better fullback in the league,” Tom Brady said of Develin during their 2014 Super Bowl season, and Develin has only gotten better since. 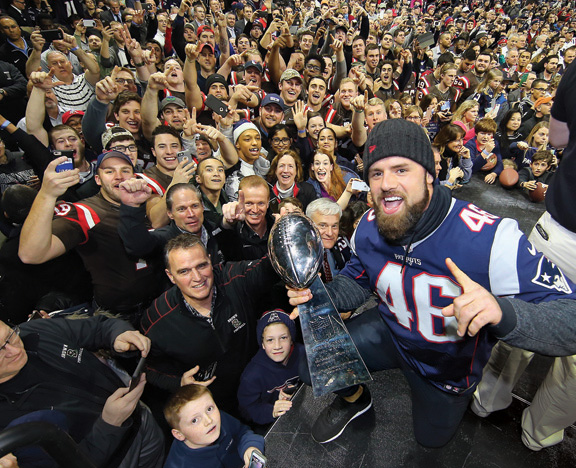 David Silverman
When Patriots fullback Develin brought the team’s latest Super Bowl trophy to Providence in February, Brown’s football team and coaches stood right up front.
This year’s Super Bowl was an emotional roller coaster. Down 28–3 in the third quarter, how did you and your teammates keep the faith?

I’ve always said you can never count out the New England Patriots, especially when Tom Brady’s at the helm. I’ve seen it firsthand so many times. Being down quite a few points, things just start clicking and the next thing you know we’re right back in it.

Didn’t the lopsided score make you think you might lose?

I don’t think any of us panicked. We knew it was a tall task ahead of us, but if we just kept playing one play at a time and going out there and executing and doing our job, then anything is possible. It was incredible to watch Tom do his thing when everything started going our way toward the end of the third quarter. We couldn’t have drawn up a better storybook ending to that game.

You seem to relish the unglamorous role of fullback.

The position allows you to be the aggressor and stick your face in someone else’s who doesn’t want it there. When I’m able to do that, and I see someone like [running backs] LeGarrette Blount, James White, or Dion Lewis break off a run because I’m able to do my job—it’s a great thing. As far as not getting any of the glory, that’s not why I play football. I play to do what’s best for the team and get my running backs where they need to be. To have them turn around and just pat me on the head—that’s all the thanks I’m looking for.

After coming back from a broken leg in 2015, how satisfying was it for you to play in your second Super Bowl?

Last year with the injury, that drove it home how much of a privilege it is to play in this league and play football as a job.

Did you ever imagine in your wildest dreams that you’d earn two Super Bowl rings?

It was definitely a dream of mine to play in the NFL. Having been to two Super Bowls in five years, I don’t think I ever could have really dreamt up something like this, but it truly is a dream come true.

Reader Responses to The Comeback Fullback