Christina J. Wang ’09 graduated into the headwinds of the financial crisis. So, instead of the Wall Street career she envisioned, the visual art, economics, and art history concentrator opted for a different dream: making art. 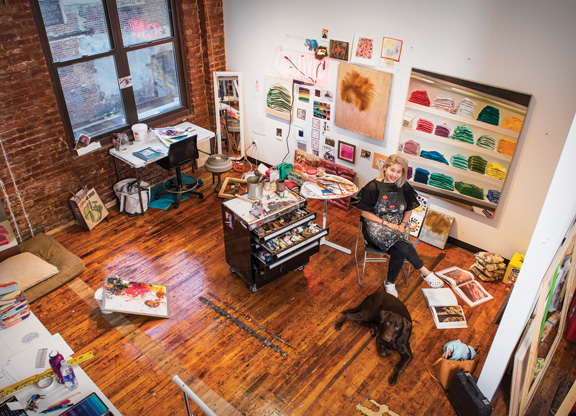 After earning an MFA from the School of Visual Arts in New York City and opening a studio in Brooklyn’s Bushwick neighborhood, Wang painted still lifes of layered cashmere sweaters and vibrantly colored flowers and fruits. In 2014, she began combining her sense of color and texture with her enjoyment of travel, food, and quotidian objects to create CJW, a line of limited-edition silk, cashmere, and Australian featherweight wool scarves and other accessories. Her subjects, she says, are “things that make me happy, things I can’t stop thinking about”—from Parisian croissants and her chocolate Labrador, Phineas, to her favorite produce, beauty products, and ice creams.

Wang’s scarves, sold via shopcjw.com  and at such retail outlets as Anthropologie, have popped up in Vogue, Women’s Wear Daily, New York, Condé Nast Traveler, and Vanity Fair. Among the celebrities they have accessorized are Taraji P. Henson, star of the Fox television series Empire, and Andra Day, who wore the “ski” scarf as a bandanna when she performed at the Democratic National Convention last July.

“Each scarf has its own story,” Wang says. In her SoHo showroom, she shows off her “wedding” scarf, a favor for guests at her nuptials last October. It features images of Nantucket, the site of the ceremony; a car, in honor of her car-dealer bridegroom; the cigars he loves; eggs and crab, which evoke two memorable meals; her skis and engagement ring; and the couple’s wedding bands. The “bride” scarf in her spring/summer 2017 collection riffs humorously on the occasion, juxtaposing a bridal gown and bouquet with Band-Aids, mints, and Spanx. 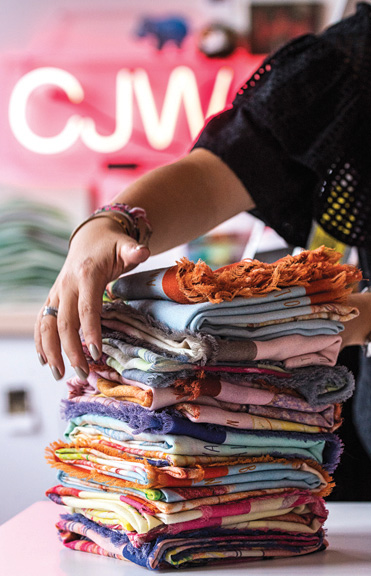 CJW
Wang's scarves are filled with images of "things that make me happy, things I can't stop thinking about."

Born in Hawaii and raised in Hong Kong, Wang found her calling in painting classes at Brown with Wendy Edwards, professor and chair of visual art, and independent study art classes with Leigh Tarantino, an associate professor of visual art. Edwards “really encouraged my work,” she says, which helped her imagine an artistic career. In 2008, Wang received the Roberta Joslin Award for Excellence in Art.

Wang says she needed to refine her “artist’s voice” when she began designing scarves. Instead of painting single objects, she began to explore “the collaging effect of putting multiple things together.” Because scarves are draped on the body, she quickly realized that small objects read better than larger ones and that colors need to complement skin tones.

So far, CJW has just one full-time employee, a China-based production assistant, but Wang hopes to expand, perhaps into home products and pajamas. For now, Phineas and her chinchilla, Bailey, serve as scarf models, underlining the brand’s whimsy.

“My dog works for free, and he doesn’t need hair and makeup,” Wang says, before rushing off to market her line at a holiday pop-up show. “And he’s always available. And he’s actually very, very well-behaved.”