On a recent balmy spring afternoon in Central City, a mostly African American neighborhood in New Orleans that’s been trying to reverse years of blight, Angela Kyle ’91 stands on a thirty-by-ninety-foot grassy lot. Near her is a bright green structure resembling a shipping container with a wooden shade porch and a deck. About ten children, divided into two teams, engage in a friendly competition around Kyle to design a Rube Goldberg–like contraption, using magnetic blocks and tubes whose only purpose is to provide a conduit for a ball to run from one end to the other. 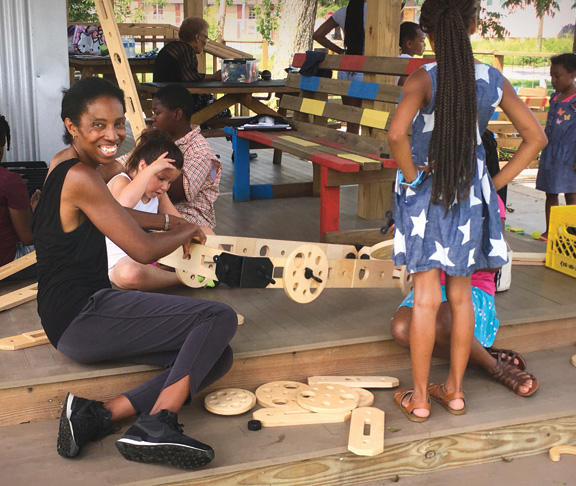 “The theory here is team building and collaboration,” Kyle explains. “We’re getting the kids to come together and pool their resources to build one big, cool mega-machine on the wall [of the structure]. They’re working on design solutions, problem-solving, saying, ‘Okay, these pieces aren’t quite fitting, so let’s put the shorter pieces here.’”

After that project, the children gather around picnic tables to draw their ideal storefronts for the neighborhood, including what products or services these storefronts will sell.

“Okay, and what else?”  Kyle asks. “What about fruit? Don’t you want to eat more than Hot Chips and wings?”

Jonathan pipes up: “I’m going to sell everything that anybody wants!”

Kyle laughs: “You can buy everything on Amazon. Can you narrow it down?”

It’s all just another afternoon at PlayBuild, the “design playground” Kyle cofounded in 2013 with Charlotte Jones, the site’s director of operations and programming. The idea behind the site is to get kids from ages 4 to 12 to start thinking about their built world—and, by extension, about all the careers that revolve around it, including architecture, design, city planning, real estate development, engineering, contracting, and carpentry. To help achieve this purpose, volunteers working at the PlayBuild site include adult volunteers who work in those fields in New Orleans. Kyle hopes that PlayBuild can be a mentorship program with a lifetime of influence, from helping students get into local high schools and colleges specializing in those fields to finding internships, apprenticeships, and, eventually, jobs.

“It’s an opportunity,” Kyle says, “to help these kids”—most of whom either live in Central City or are bused in from other neighborhoods—“to think about what their futures might look like.”

And, in a way, it’s helped Kyle envision her own future—one centered on the vibrant revitalization of post-Katrina New Orleans. Raised in Florida, Kyle, an English and MCM concentrator, earned a dual graduate degree in business and journalism at Columbia, then worked to help develop businesses in New York City, Atlanta, Los Angeles, and London, including at Turner Entertainment, CNN, and LivePlanet, Matt Damon and Ben Affleck’s production company.

After spending time with friends in New Orleans about a decade ago, she fell in love with the city’s freewheeling vibe and its unique architecture. In 2011, she bought a loft in the city’s Warehouse District and landed a short-term job with the newly established New Orleans Business Alliance. Inspired by the postwar Amsterdam playgrounds of architect Aldo Van Eyck, she pitched an early version of PlayBuild in a citywide design contest.

She didn’t win, she says, but her proposal attracted the attention of a man who owned an empty Central City lot. He and Kyle worked out a rent-to-own deal, which allowed Kyle to form a programming partnership with a local charter school. After the national playground nonprofit KaBOOM! donated a set of big blue foam building blocks from architect David Rockwell’s Imagination Playground, several local families helped clean and prep the site, and a prominent local contractor volunteered to build out the green shipping container that now stands on it. Last summer, a ribbon-cutting ceremony brought out a clutch of local business and political leaders.

Kyle and Jones are raising $250,000 to set up a nonprofit administrative infrastructure that will bring PlayBuilds to other cities. “I can see this in Detroit, Oakland, Miami, Los Angeles,” Kyle says.

Despite her peripatetic business travels, Kyle now considers New Orleans her home. “I’ve decided to see and feel the impact that can be made at the ground level, planting career seeds with kids,” she says. “They’re in elementary school now, but we can build bridges to help track them into design schools like the Rhode Island School of Design, the Savannah College of Art and Design, and Tulane right here. We’re going to be in this neighborhood with these kids and their families for the long haul.”

Reader Responses to Playing for Keeps