Have a Wafel Break

Rip Pruisken ’10 is a fan of taking risks. Calculated ones. He turned down a job offer with McKinsey to make stroopwafels, wafer-and-caramel cookie-like treats that he grew up eating in Amsterdam. Now it’s paying off: he and Rip van Wafels cofounder Marco De Leon ’12 started distributing their snacks at Starbucks stores in 2015, the same year they were in Forbes’s 30 Under 30. 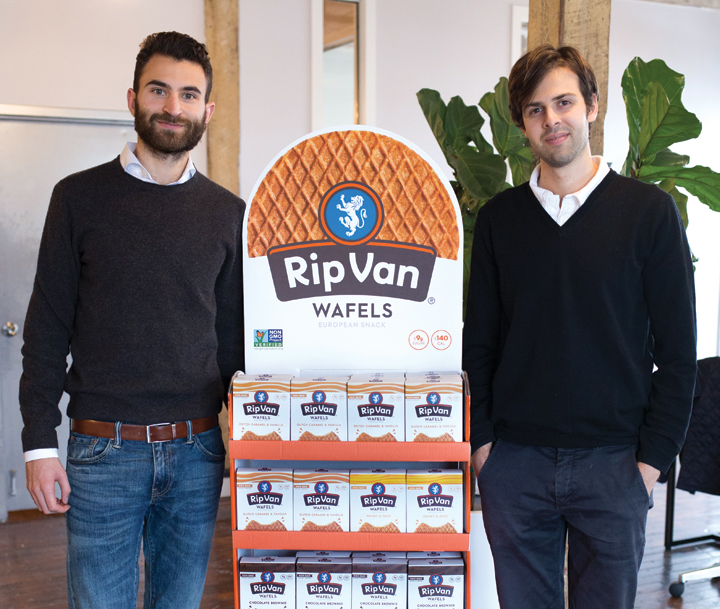 It all started in Pruisken’s dorm room at Brown, where as a junior he began playing around with a waffle iron and selling wafels on the College Green. “I just had this feeling in my gut, like, I’m going to go for it. All my friends thought I was an idiot,” he recalls. “It was really scary, to be honest.”

There were indicators of success, however. Thanks to a successful Kickstarter campaign and a first-place finish in Brown’s start-up competition, he and De Leon had $30,000 of capital. They pooled that with $200,000 they raised from their families and invested it in a co-packing facility to scale production and start selling to local colleges.

“Most food innovation happens within categories that Americans are already familiar with,” Pruisken says: granola bars, cookies, or juices, for example. Rip van Wafel is different. Unless you’re Dutch, you’ve likely never had a wafel.

Thanks to a Brown connection, they approached a Bay Area tech company to allow them to feature wafels in its break room. Soon their product was a feature in the break rooms of Google, Yelp, Uber, and Facebook. This success helped them raise $900,000, which allowed them to approach Starbucks. Today, they’re featured in more than 7,500 coffee shops.

“I think this can be the next American staple,” Pruisken says.

Reader Responses to Have a Wafel Break