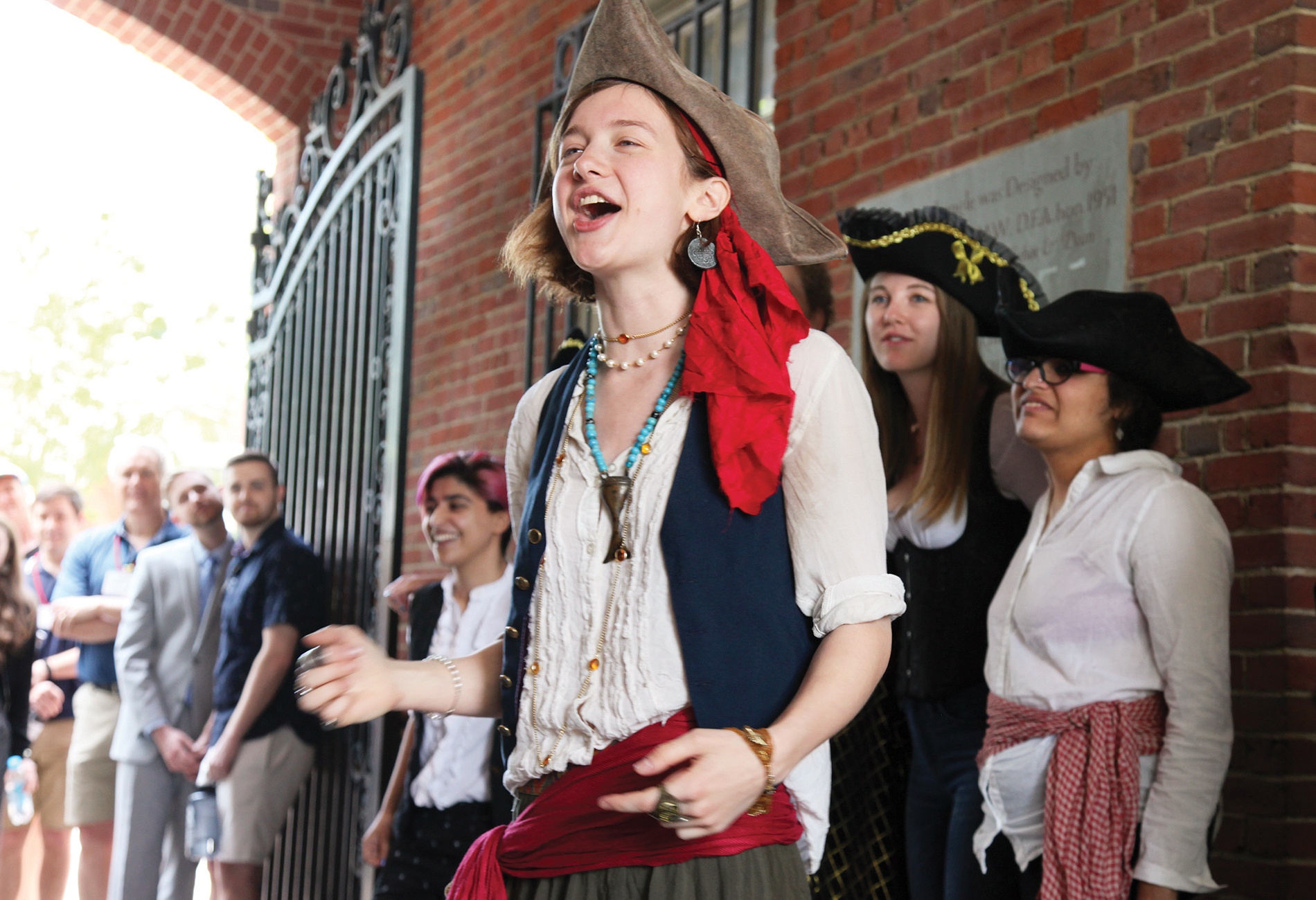 The Pirate Scummy (Charlotte Senders ’18) sings out during a Reunion event in May. photo: Scott Lapham
Student Life

Before he became the Dread Pirate Roberts, the most notorious of all a capella leaders to sail the high seas, Sam Kusnetz ’02 was a landlubber rigging ropes in theater productions around campus. Working alongside Jarrett Byrnes ’01, the man who would eventually take the name of Redbeard, Roberts realized how similar his job hoisting, tugging, and knotting ropes was to a sailor’s craft. This insight inspired Roberts and Redbeard to found the Pirates a capella group, which, after gaining its sea legs, is now celebrating its 20th anniversary.

“We felt there was not a sufficient representation of the ridiculous amongst the a cappella scene,” recalls Roberts, who now does sound design for off-Broadway plays.

The Pirates crew is typically composed of around 15 hands, all of whom know each other only by their sea names: Triple Nipple Jones, Old Navy Johns, Sir Cumference, Shark Fin the Well Seasoned, and so on. As some old-timers admit, the Pirates are a hardy lot more gifted in volume than pitch when they sing their traditional sea shanties and Irish folk songs, but they are certainly carried by their unabashed embrace of frivolity.

“We do tend to occasionally forget the words to songs, so we try and encourage lots of audience participation,” says current captain Lady de Plank (Isabel Shaw ’20).

They perform a few times each semester, ending shows with the legendary sing-a-long “All For Me Grog.”

Pirates lore is laden with traditions. For one, the Booty Master a.k.a. group treasurer hides a chest in their dorm room containing the club’s fundraising proceeds—kept in “doubloons” a.k.a. $1 coins. And each semester when a new captain is selected they must recite the names of all previous captains in the “passing of the hat” ceremony.

While Roberts notes it is important not to romanticize piracy—most pirates were, after all, rapists and murderers—he says he nevertheless admires the egalitarianism of 17th century pirates, where women and people of color were often accepted and everyone was given a voice in affairs after pledging to a code of honesty. The modern Pirates have their own honor code: to behave “in a preposterous and silly manner,” Roberts says.

“We have a strict no murdering or raping policy, but we will pillage on occasion.”

Many old salts and scurvy scoundrels may have put away their cutlasses after graduation but they have not lost touch with their piratical inclinations and will respond to the call of the Jolly Roger when it’s hoisted. Every five years, alumni and current crew rent a house together and spend a weekend rejoicing, singing, and searching for buried treasure.

For former captain Trollop (Tracy Hadden Loh ’04), many of her best friends came from the crew. She even met her future husband—the pirate Half Ass (Josh Loh ’03)—during arrrditions her freshman year.

“There is no way I could have known it in advance but it turned out to be the most important part of my Brown experience,” Trollop says. “It was great for forming lasting relationships because it was this group that was founded in the spirit of fun.”