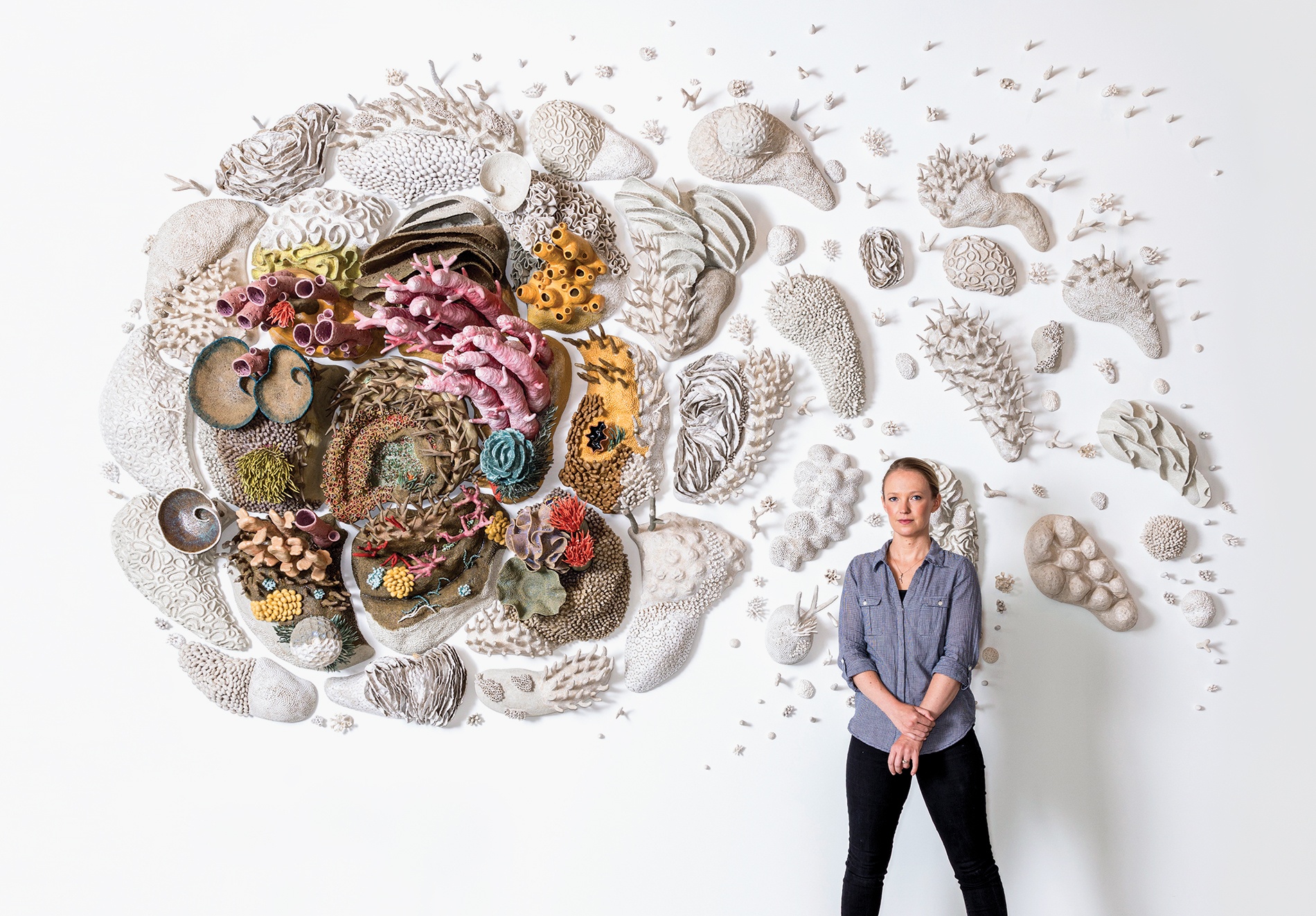 Mattison with “Our Changing Seas III,” depicting a swirl of coral morphing from bright to bleached, a sight playing out in real life across the world’s reefs.photo: Jeff Minton
The Arts

Fragile Beauty
Artist Courtney Mattison ’11 AM draws on her master’s in environmental sciences to create ceramic installations of the colorful invertebrates at the heart of our endangered coral reefs.

Courtney Mattison ’11 AM spends countless hours in her studio feeling like coral. Just as the silent, seemingly motionless colonies of tiny invertebrates are capable of creating expansive, vibrant reefs, Mattison works quietly, building hundreds of small ceramic pieces that will each take their place one day in one of her huge, intricate art installations.

Mattison has charted an unusual course from the sandy shores of San Francisco, her hometown, to the depths of Brown’s libraries, and now to her maker’s studio in Los Angeles, always exploring at the intersection of art and science.

It began in her first marine biology class in high school, when Mattison recalls feeling “overwhelmed with this alien world” that she could only peek at under the waves. Around the same time, she began taking ceramics classes and made three-dimensional clay models of marine animals in order to better understand the creatures she was studying.  “That weird combination”—of ceramics and biology—“felt very natural.” 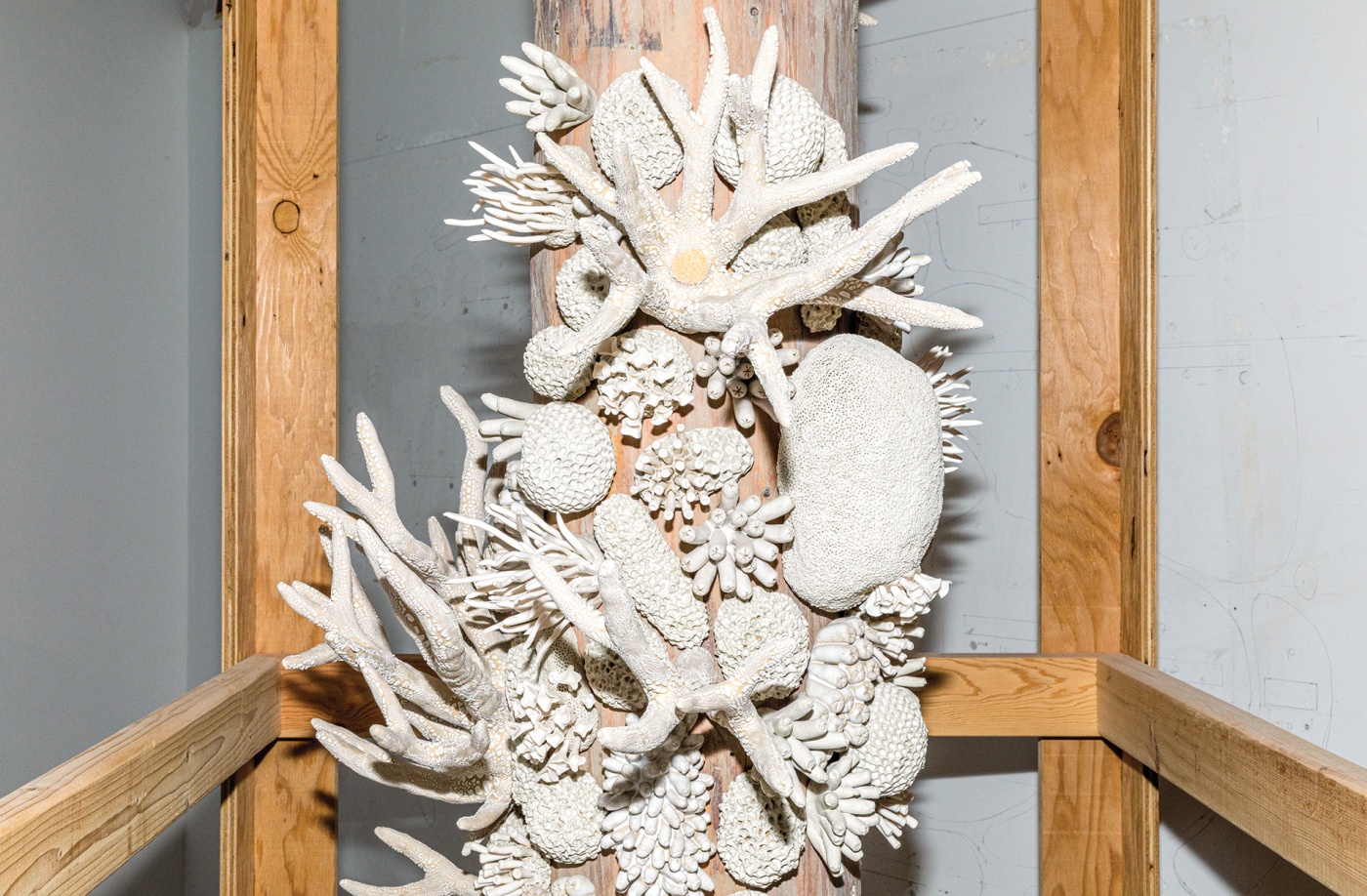 A work in progress at Mattison's LA studio.Photo: Jeff Minton

Mattison continued to combine sculpture and oceanography at Skidmore College, studying abroad in Australia, where she visited the Great Barrier Reef. “The second I put my mask underwater, I felt like I was flying,” she remembers. “The water was so clear that I felt like I could fall to the bottom.” There was a six-foot barracuda, flashing silver, staring right at her. There were vivid corals everywhere she looked. This was a whole world in which “things moved at a different pace, people didn’t matter, and the different species were interacting and following their roles in the ecosystem to make it function in a way that was beautiful.” 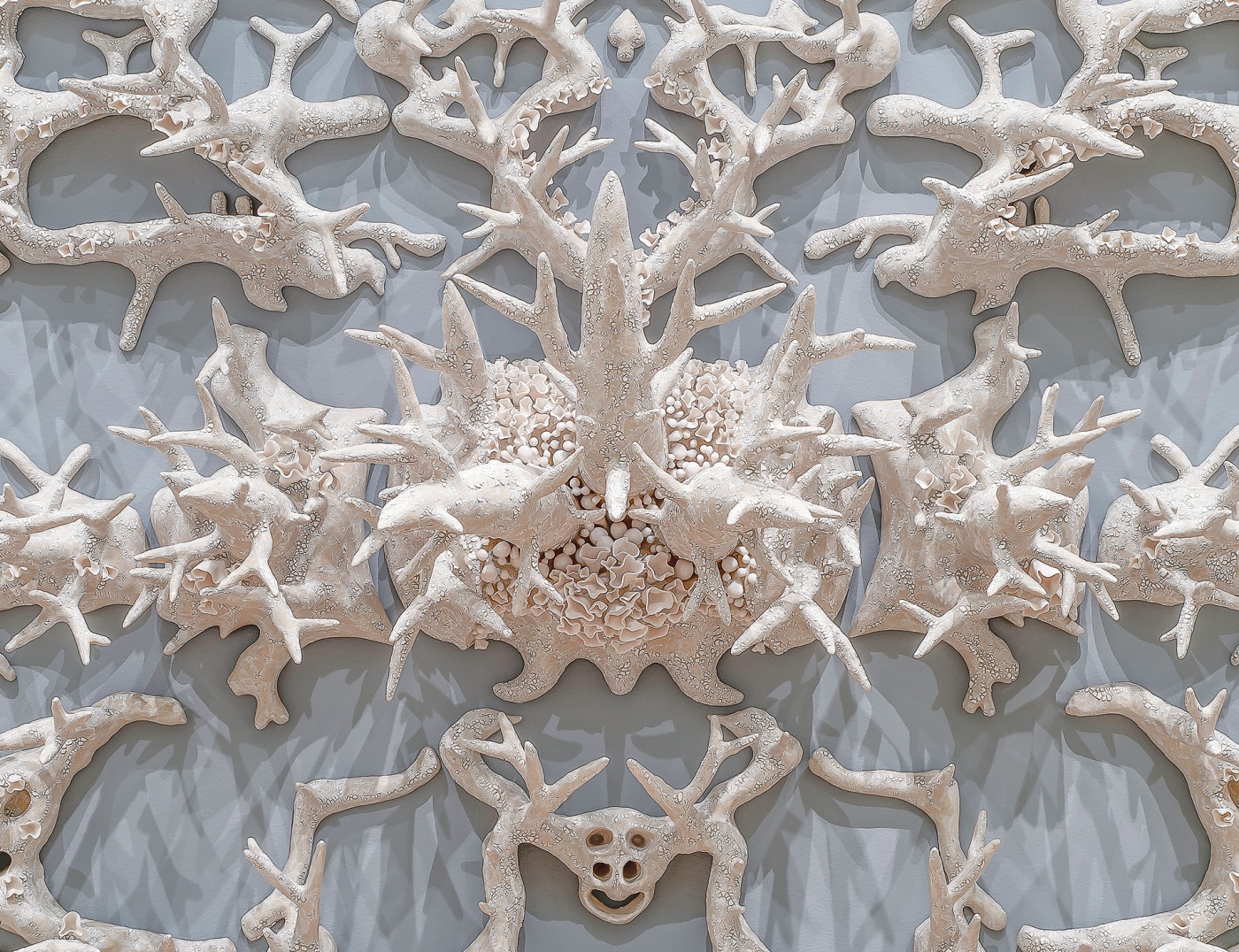 Mattison went back to the reef as often as she could during her eight months in Australia, even volunteering on a tourist boat so she could dive for free. At the same time, she was taking coral reef ecology classes that focused on the damaging effects of human influence through climate change, pollution, and overfishing. “I felt heartbroken,” she says. She was exploring “this amazing new part of our planet” just as she “realized how quickly we could lose it if we don’t act urgently to change our lifestyles and policies to preserve it.”

It was a turning point—the moment when she decided to use her art to “inspire people to care on an emotional level” about coral reef ecology and ocean conservation. But how? 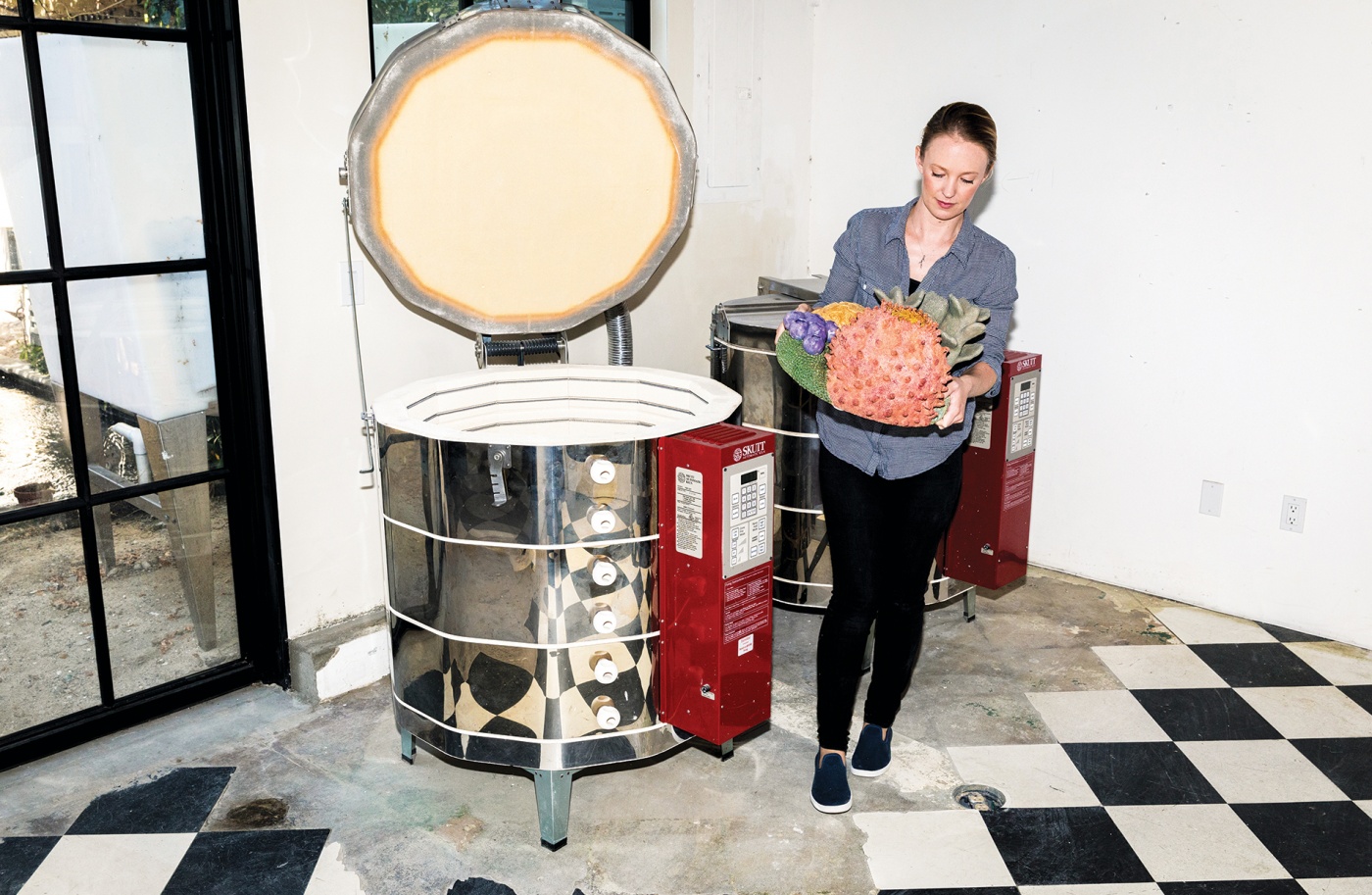 In search of more knowledge, and torn between her identities as a scientist and an artist, Mattison came to Brown for a master’s in environmental sciences. “I knew I wanted to create a masterpiece, but I had no idea what that meant,” she says. She found advisers who encouraged her to take advantage of Brown’s relationship with Rhode Island School of Design. Mattison completed about half of her coursework at Brown and half at RISD, studying marine conservation biology and taking independent studies in advanced ceramics. By 2011, she had created her masterpiece: “Our Changing Seas,” a massive wall installation, debuted in the lobby of the U.S. Department of Commerce in Washington, D.C., through the National Oceanic and Atmospheric Administration.

Mattison works full-time as an artist in L.A. now and has completed five more installations in the “Our Changing Seas” series. The largest was a project commissioned by the U.S. Department of State through their Art in Embassies office. The installation, titled “Confluence (Our Changing Seas V),” is installed in the U.S. Embassy in Jakarta, Indonesia, and measures 28 feet tall, 18 feet wide, and 1 foot deep. She describes the piece as “a gigantic, vertical, swirling hurricane spiral of corals with the really colorful, healthy ones at the kind of eye of the storm, and then trailing white, bleached coral skeletons” that wind out toward the edges. 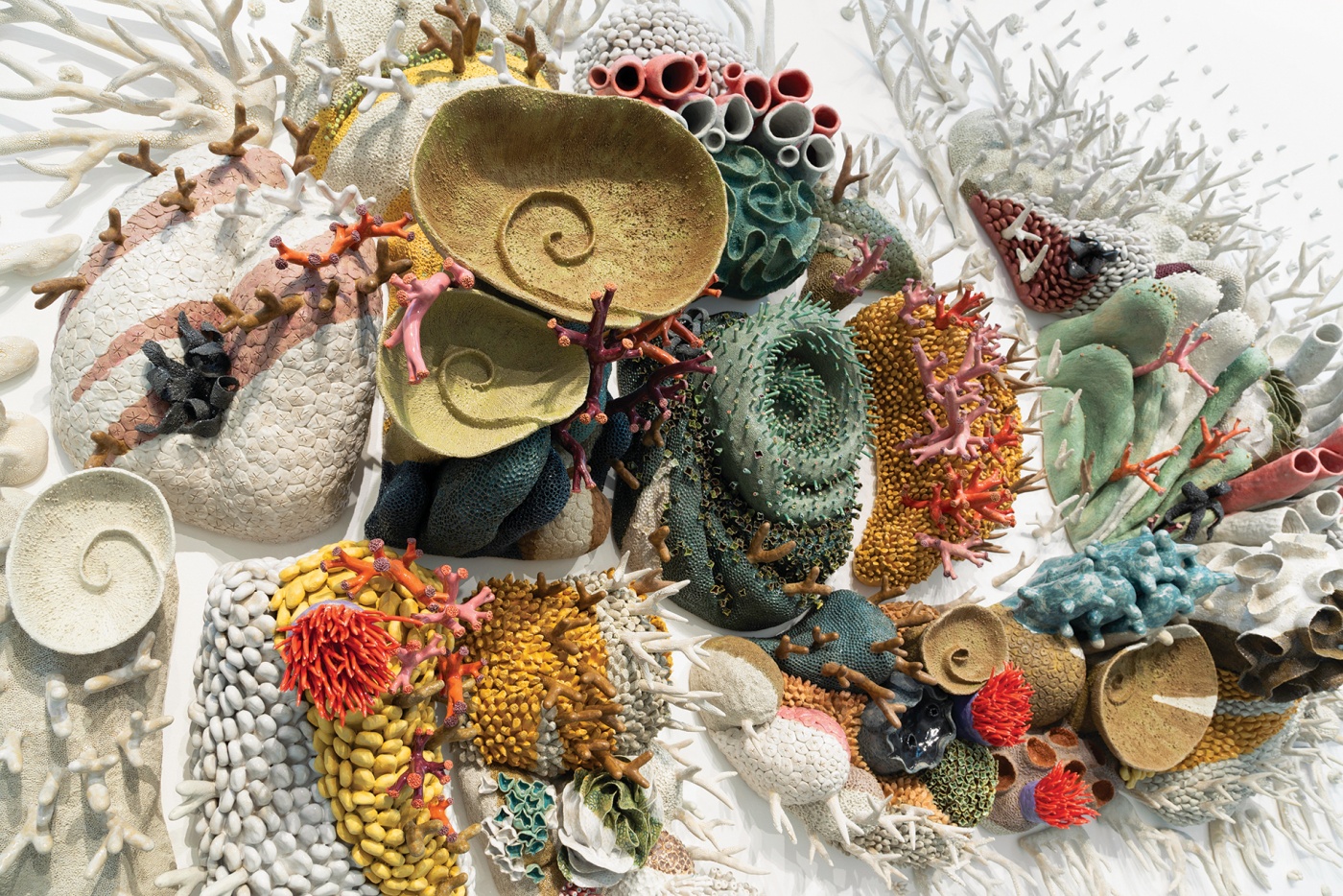 Mattison’s coral is quite fragile, “similar to the delicate bodies of living reef organisms,” she says.

Coral bleaching occurs as a result of changes in ocean conditions, such as warming  temperatures caused by climate change. Coral polyps expel the algae that usually live inside their tissues, and that provide them with color and food. The coral that’s left behind may still be alive, but is stark white, beginning to starve, and vulnerable to disease.

Mattison provides a powerful visual representation of the speed with which this process can happen by showing the sharp dividing line between healthy and bleached corals. There’s no gradual fade, in art or life. And though she molds many eye-catching creatures, she does not do fish. People often don’t realize a reef is unhealthy when the brightly colored fish are still present, she explains: “If you can look Nemo in the eye, then you may not realize the reef he’s living in is actually dying.” 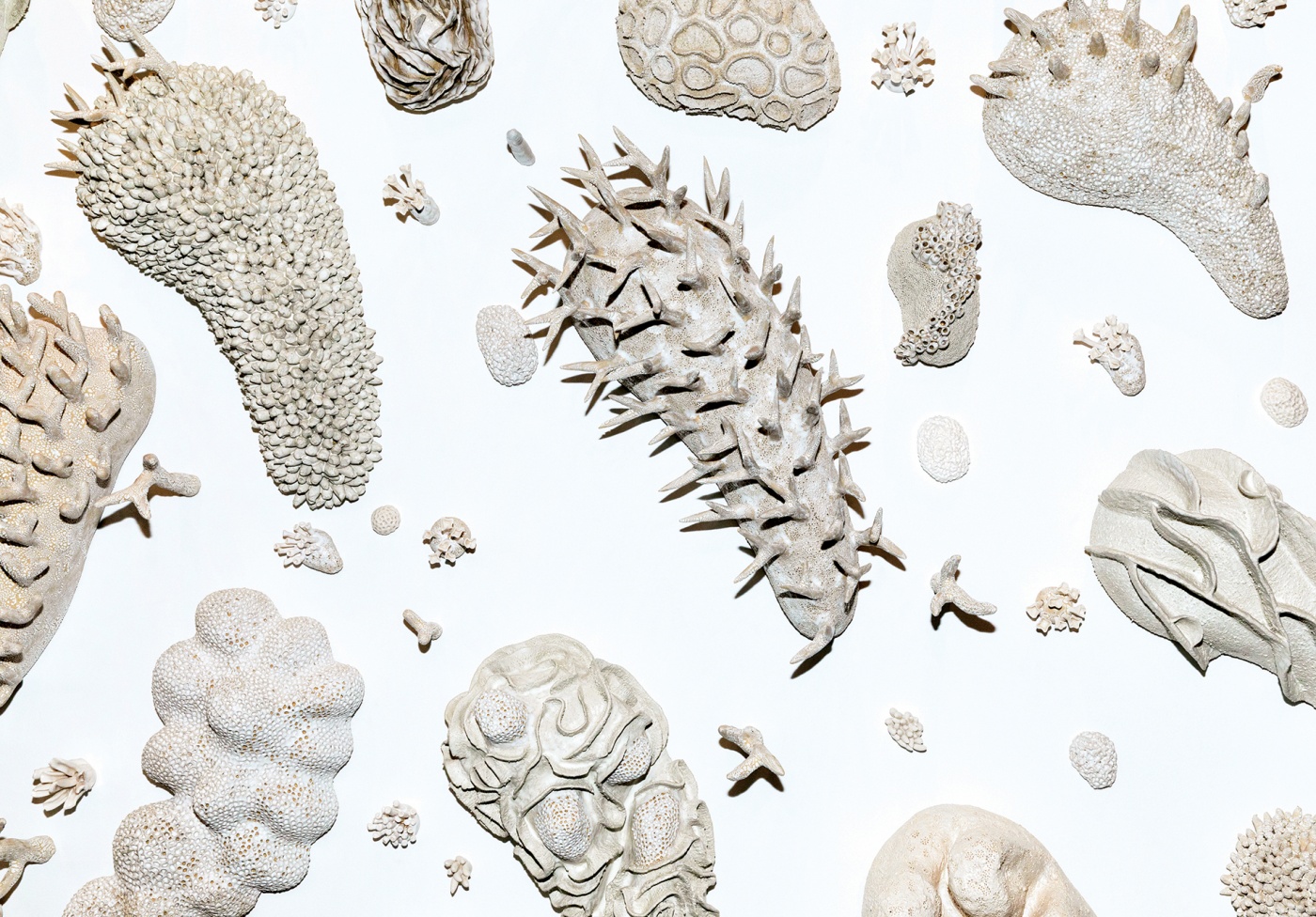 Instead, Mattison painstakingly crafts a wide range of marine invertebrates, including corals, sea sponges, mollusks, anemones, urchins, and more. She wants to draw attention away from the dazzling, darting fish; she’d rather shine a spotlight on the silent, still creatures that form the base of every coral reef’s ecosystem.

For her sculptures, Mattison uses simple tools like paintbrushes and chopsticks as well as a combination of different ceramics: stoneware for the larger, more structural pieces, porcelain for the smaller, brightly colored decorative pieces. Ceramics share physical similarities with corals, she observes. “Brittle [ceramic] anemone tentacles and coral branches—they’re really fragile. If you touch them improperly, they break. And that’s exactly how living corals are in real life.” She displays her work on large walls in order to help viewers “feel like they’re hovering over the reef the way I do [when I dive].” 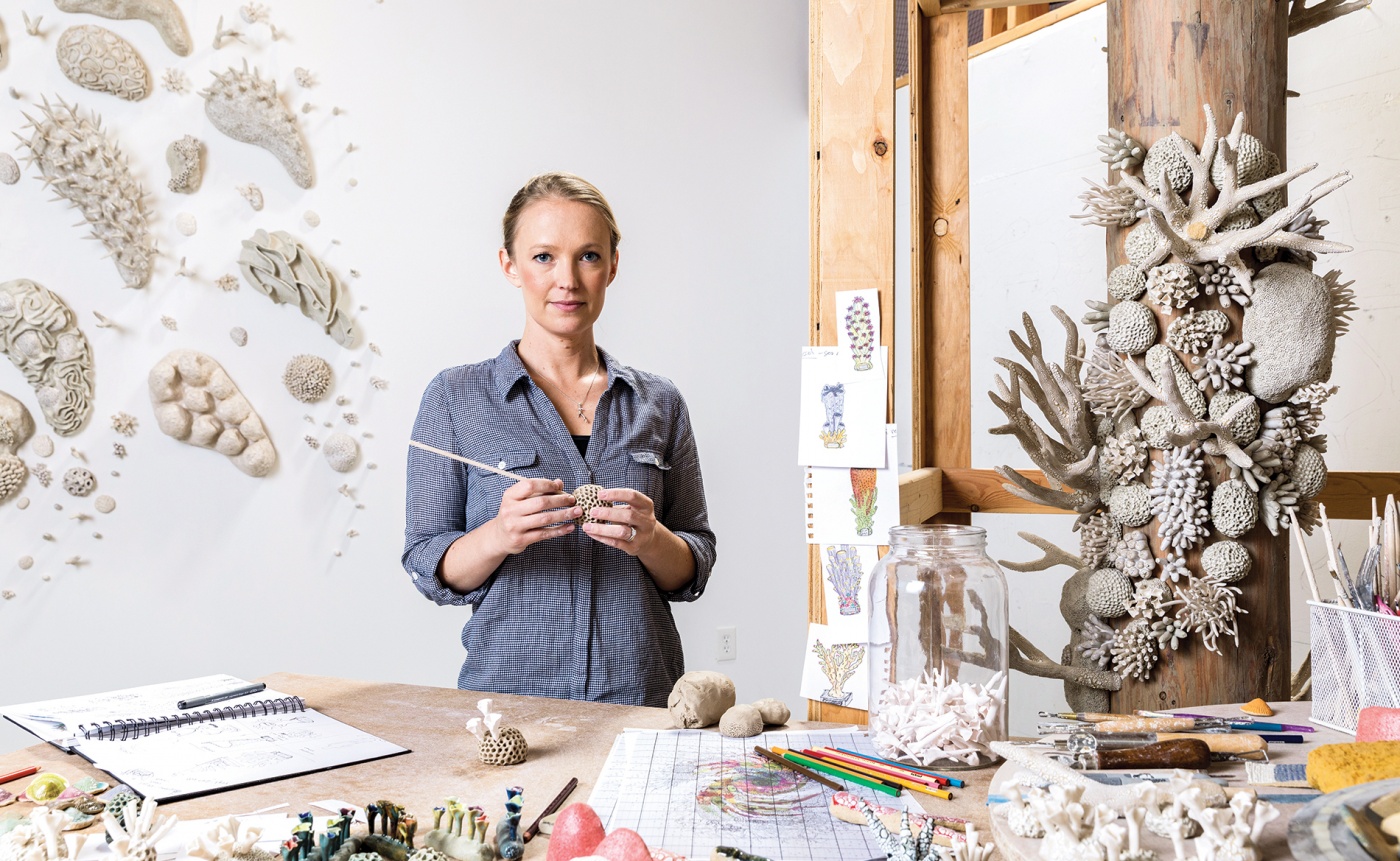 Mattison uses her fingers and simple tools like a chopstick to shape each bit of clay in her large installations. Photo: Jeff Minton

Mattison debuted two of her latest pieces at a show titled “Fragile Earth” that opened in June at the Florence Griswold Museum in Old Lyme, Connecticut. “Malum Geminos,”  which translates from Latin to “Evil Twin,” was inspired by the idea that coral bleaching and ocean acidification are “the equally evil twin threats to the ocean” that the world faces today.

Also at the Connecticut show is the smaller “Texture Study.” The work is Mattison’s imagination of a future coral reef that has been overtaken by a single, resilient species, in this case a pink tube sponge. The resulting single-dimensional, sickly-looking installation consists of “one texture, one species of tube sponge, instead of a whole bunch of diversity swirling together.”

Ultimately, Mattison aims to inspire people because she believes “we’re nearing a tipping point.” Always conscious of her own material and energy expenditure, she’s careful to fire only completely full kilns and is working to install solar panels to help power her studio.

“There are so many ways we can allow nature to heal itself, if we let it,” she says. “I think there’s still time—and there’s still hope.”

In style, Mattison’s art (“Fragile Beauty,” Sept/Oct) is like that of two masters in wood: Grinling Gibbons and David Esterly. I wonder if she would trace her style to either? Two quotations help to suggest a relationship—Mattison says, “A gigantic, vertical, swirling hurricane spiral of corals.” Esterly says, “Great cascades of flowers, fruits and vegetables; whorled thickets of eggplants, acorns, seashells....” Mattison’s work is prominent at the U.S. Department of Commerce Building in Washington, D.C.; Gibbons’s work is at Blenheim Palace and Hampton Court in England; and Esterly was invited to repair and replace some of Gibbons’s work.