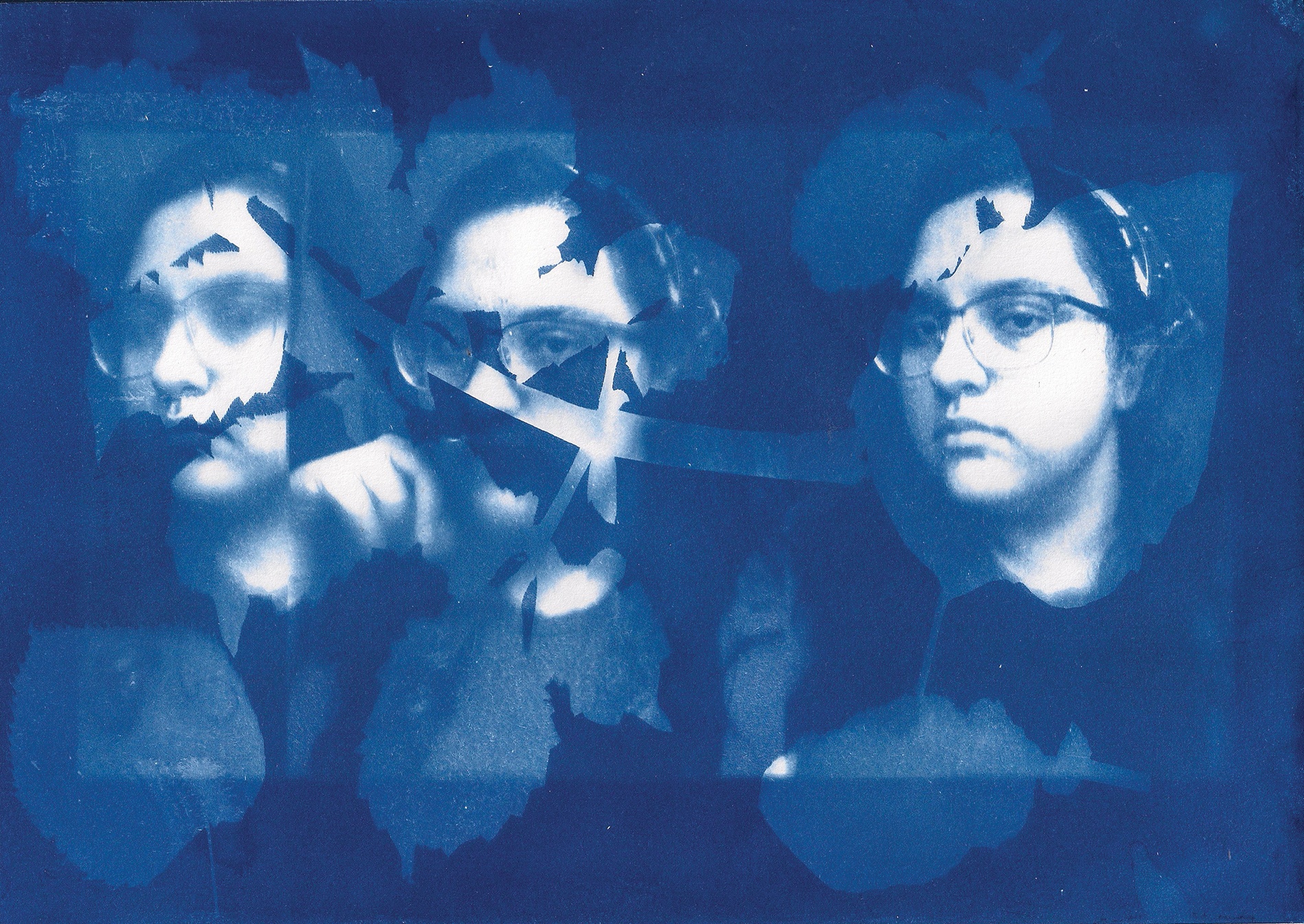 A sprig from her mother’s garden frames Zandi’s self-portrait; cyanography was popular with 19th-century botanists.Photo: Hasiba Zandi ’21
The Arts

I got into photography when I had my first phone and I wouldn’t stop taking photos and playing with lighting and angles. So, with an iPhone you take your pictures and then you post it on Instagram. But it’s never physically there, except for your cinderblock phone. I wanted to learn how they took pictures back in the day. So I took Visual Arts 140 and learned how to develop my own photos from film. It’s very particular, which is something that I both really liked and really hated. You need to have the developer in for 10 minutes and if it’s 10 minutes and one second, you’ve ruined it. But if it’s nine minutes and 59 seconds, you’ve also ruined it. And that’s just really sad. I liked learning discipline. But I also don’t like being forced to make these perfect exposed pictures all the time.

I missed being in a development lab when I didn’t have access anymore. I was like, “I’m home. I have nothing better to do. I want to learn a medium that I’m going to like doing, that I can continue doing.” There are so many different ways that people take pictures, like cyanotyping, which is what I do now using potassium chemicals. Once you mix them together they dry on paper, and when they’re exposed to the sunlight they turn blue. I do it in a closet and I block out any accidental light scares with a big luggage bag. I have some cardboard from an old package that I cut up and laid on the floor to catch spills. It looks VERY sus but it works!

There’s something so intriguing about how photographs are always grounded in reality. A photo can be edited to death and look like something alien but maybe it began as a photo of a dog! Weird! I don’t really know what my style is. I will say, over the last few years, I’ve started forgetting a lot of things unless I write them down or take a photo/video. So mostly, the pictures I take are just something I want to remember later on, whether it be a happy or sad or whatever-feeling memory.

I’m also sending mail to people, same “back in the day” idea. Four tiny pictures I print on tiny paper and then I make postcards. I’ve been sending them out every so often when I make more. I just randomly ask people, “What’s your address?” Connection through mail is a fun surprise if you aren’t expecting it. I think everyone likes getting mail. After being so digital, it’s cool to have something physical to hold and touch to remember that
your friends are real.