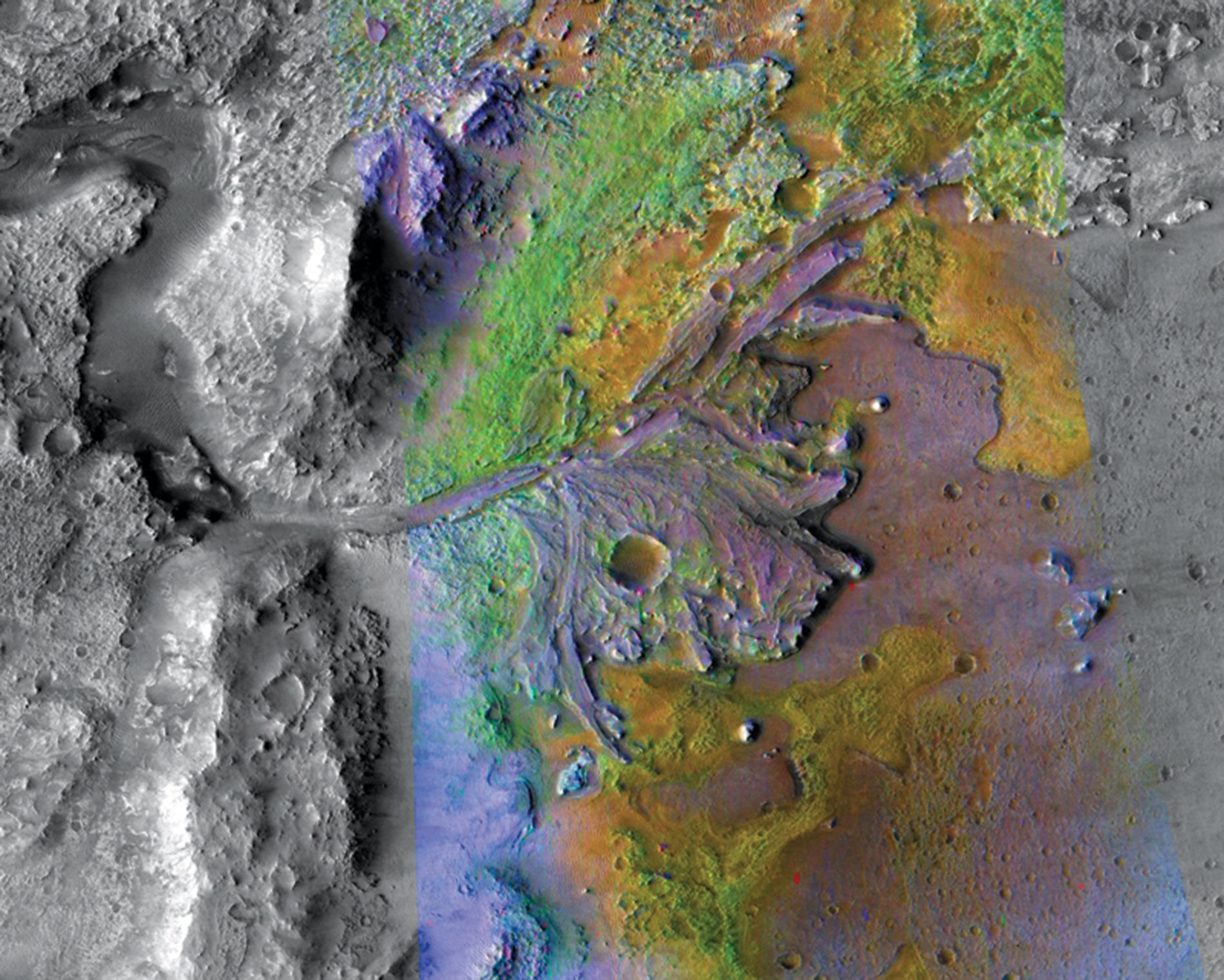 NASA’s Perseverance rover, launched last July, is headed for a Mars landing in February. Its landing site, Jezero Crater, was discovered by Caleb Fassett ’05 ScM, ’08 PhD, while studying at Brown under Professor Jim Head. “My first project was looking at valleys and lakes,” recalls Fassett, now a planetary scientist at NASA’s Marshall Space Flight Center. “We were interested in water, and it’s an important story—how much water had been on the surface.” Fassett spotted an unusual crater. “You could tell there was sediment at the mouth of the river that entered the crater and that there was a valley leading out on the other side,” he says. “That valley was important, because it meant you had to fill up the crater to allow it to form—it was an overflow point. That gives you a direct way of determining if there was a lake.”

NASA’s primary goal for the mission is searching for signs of ancient microbial life, so a former lake site is the right place to look. In 2014, scientists began the selection process for the best candidate among 30 sites. Enter Tim Goudge ’12 ScM, ’15 PhD, who came to Brown in 2010 and set to work building on Fassett’s findings. “Jezero is a remarkable site—the science there is spectacular,” says Goudge, now an assistant professor of geological sciences at the University of Texas, Austin. “When the first landing-site workshop occurred, I was talking with Professor Jack Mustard and another Brown alum, Bethany Ehlmann ’08 ScM, ’10 PhD. She’d also done some work on Jezero, and I was going on with it, combining Caleb’s work with hers.” Ehlmann, now a professor of planetary science at Cal Tech, was considering other sites, so she handed off Jezero to Goudge. “I’ll forever be grateful,” he says. “It was a real sign of her collegiality.” Goudge made a strong case and in 2018 Jezero was selected.

Fassett and Goudge both say they want to know if there are biosignatures, but they are even more interested in learning about the geology of the ancient lake bed. “What I’m excited to see are the spectacular sedimentary features that are going to be exposed,” says Goudge. “We see images of gorgeous layers within rocks in Utah, these incredible rock formations where you can almost see the old landscapes that formed them. That’s what I want to see for Jezero.”

Reader Responses to Mission to Mars