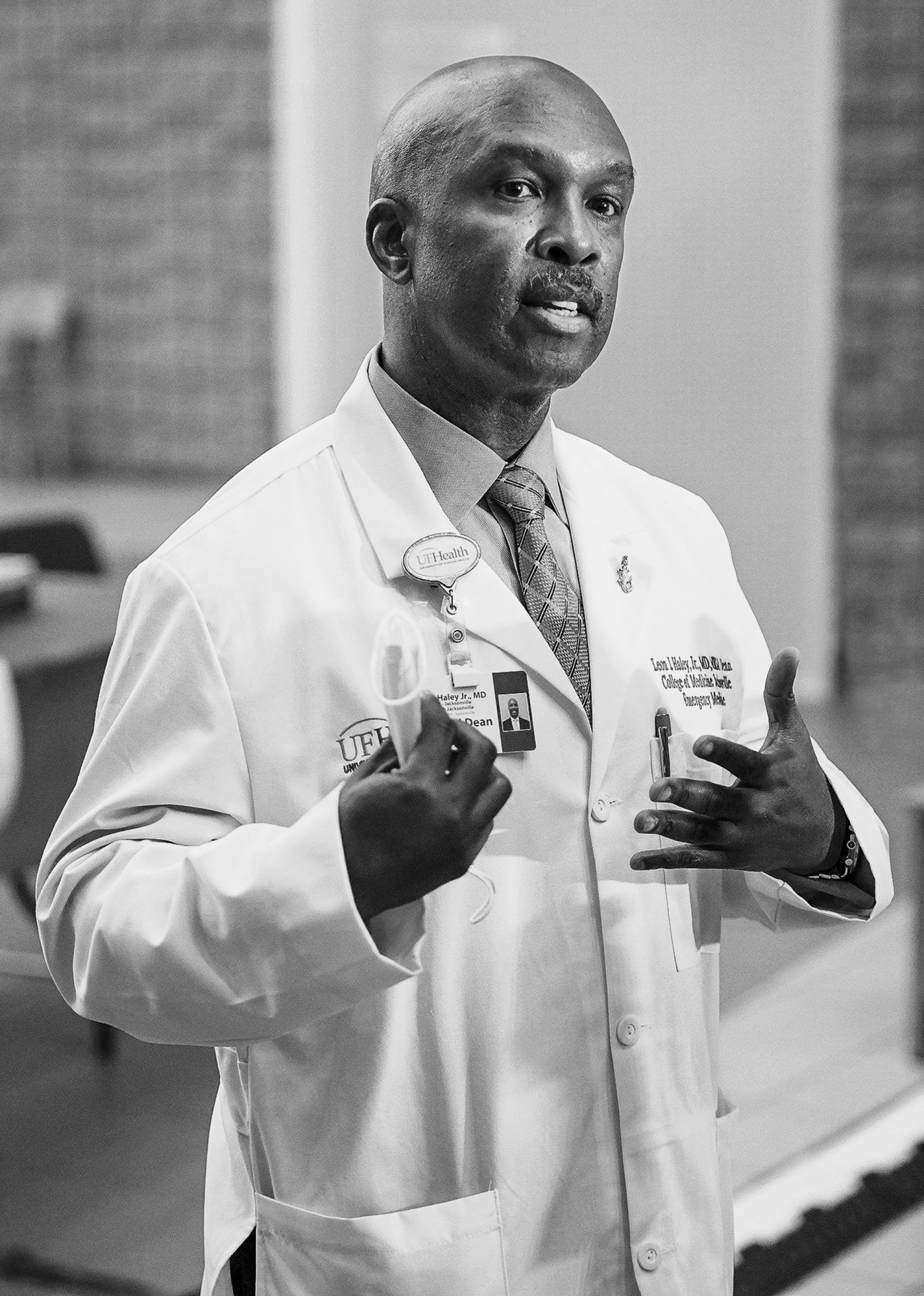 When the COVID-19 pandemic broke out, Leon L. Haley Jr ’86 was the first medical professional in Florida to receive the COVID-19 vaccine. He called it a “humbling moment,” and for the next seven months, Haley—CEO of the University of Florida’s teaching hospital, UF Health Jacksonville—made it his habit to walk the halls of the medical center personally inoculating as many staff members as he could. On July 23, the day before he died from a jet skiing accident while visiting his sister, he had administered vaccines to 15 staff members.

A sports enthusiast who always dreamed big, Haley planned to be a sportscaster on network TV until a high school football injury sidelined his plans and “got him started talking about becoming a doctor,” said his mother, Elizabeth Haley.

He concentrated in biology at Brown and was deeply involved in campus life, working as a Minority Peer Counselor, helping to organize ONYX—the Black Student Initiative’s annual celebration of Black students transitioning to being alumni—and pledging the Theta Epsilon Chapterof Omega Psi Phi, where he served a term as president. In 1985 he participated in a sit-in at the John Carter Brown Library to bring to light issues of racial injustice for students in the Third World Transition Program, as well as demanding Brown hire more faculty of color.

“From the beginning, I admired his tremendous sense of purpose and resolve to make a difference in the world as a physician,” says Dr. Mohan Suntha ’86, his roommate and fraternity brother. “Medicine was certainly the pathway, but his interest in contributing to the community and being a force for good transcended his desire to become a doctor.”

After graduating, he returned to his hometown to attend the University of Pittsburgh’s medical school. A residency in emergency medicine followed at Henry Ford Hospital in Detroit, where he was selected to serve as chief resident; he also completed a master’s degree in health services administration from the University of Michigan. Following his tenure in Detroit, he headed to Atlanta to serve as an executive associate dean for clinical services at Emory School of Medicine/Grady Memorial Hospital and as chief medical officer for the Emory Medical Care Foundation. At Grady, he was credited with implementing a rapid evaluation process for the ER, shortening wait times by 45 minutes and decreasing the number of patients who left without being seen. In 2017, he moved to Jacksonville as the dean of the medical school of the University of Florida in Jacksonville and in 2018, he was appointed CEO of University of Health Jacksonville, the first African American to hold that position.

Throughout his career he received numerous awards and recognitions. He made an impact in Jacksonville, where he was an active board member of the Jacksonville Chamber of Commerce, the Jacksonville Civic Council, the American Hospital Association Urban Sustainability, the Florida Hospital Association, the Florida Safety Net Hospital Alliance, the Accreditation Council of Graduate Medical Education, the American Board of Emergency Medicine, and the Jacksonville Electric Authority. His work drew accolades: he was chosen as the Jacksonville Business Journal’s  Ultimate CEO in 2019, was listed in Who’s Who in Black Atlanta 2007 and was named one of Atlanta Business Chronicle’s  Healthcare Heroes for 2005, one of Georgia Trend Magazine’s 40 Leaders Under 40 in 2002, and Georgia Association of Physician Assistants Physician of the Year in 2003. He also served on the State of Georgia’s Trauma Network Commission.

Karen Dates ’86 recalls, “Leon was always the voice of reason and support. He believed in community and encouraged people or helped them to navigate past difficult moments. His friends were like family to him and he always made the time if you needed his advice.”

In the months after his death, Emory University School of Medicine dedicated the Leon L. Haley, Jr. MD endowed chair, while UF Health Jacksonville held several vaccination clinics in his honor, inspiring hundreds more to get the shot—including 152 who chose to be vaccinated in his name at a rally the day before his memorial service, who proclaimed their new catchphrase “Haley Strong.”

It was a fitting tribute, friends said. “He fundamentally cared about people,” says friend Dr. Petra Thomas ’86, “and would make the extra effort to make sure that people he cared about were okay.”

At his memorial in Atlanta, the testimonials to Haley’s impact stressed his deep dedication to serving all patients with high-quality medical care and providing critical mentorship to young doctors, and a tribute from President Joseph R. Biden honored him for his heroic work serving the community during the pandemic. His son described his father as a “servant and hero who dedicated his life to others.”

Haley is survived by his parents, a daughter, two sons, a sister, and a nephew.