It’s not easy being green, but developer Steve Glenn aims to help his clients help the planet—even while they sleep. In March, his new company, LivingHomes, installed its first ecofriendly prefab house in Santa Monica, California. Glenn hopes the 2,500-square-foot house, designed by modernist architect Ray Kappe, will inspire Prius-driving Whole Foods shoppers to choose an environmentally sensitive alternative to McMansions in the ’burbs. 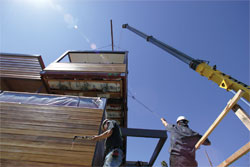 This spring, the prefab house was trucked to its foundation and installed; you can see the process at www.livinghomes.us.

A Silicon Valley veteran who developed his first start-up, Clearview Software, as an undergrad and sold it to Apple, Glenn has a history of making ideas pay. He helped found the Internet incubator Idealab and ran one of its offspring, Peoplelink, as well. But from childhood, he says, “My first love was architecture.” A summer term at Harvard’s Graduate School of Design taught him he had neither the talent nor the temperament to be an architect. But it also exposed him to the work of visionary planners like James Rouse, of Faneuil Hall fame. Glenn concluded that developers are in a better position than architects to improve the world and turn a profit in the process.

That’s what Glenn aims to do with LivingHomes, and he will practice what he preaches. The Santa Monica prefab, which was installed April 13, won’t be just a showcase for his company; it will also be Glenn’s home. So far, LivingHomes has sold five houses; it’s also developing residential communities in the town of Joshua Tree, California, and elsewhere. To counter prefab’s stigma, Glenn signed on highbrow architects Kappe, who made wood houses synonymous with California, and David Hertz, who is reknowned for his creative use of recycled materials—jumbo-jet fuselages, for instance.

Glenn hopes LivingHomes will be the first residential building to achieve a Platinum rating—the A+ of green-goodness certification—from the U.S. Green Building Council (USGBC), which has developed the LEED certification program (Leadership in Energy and Environmental Design) for rating buildings. Under LEED, the USGBC assigns points for everything from using recycled materials for construction to reducing energy and water consumption in the final structure. 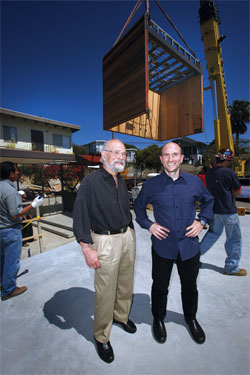 LivingHomes use a particularly efficient prefab construction process; Glenn says 98 percent of LivingHomes’ raw materials make their way into the final house. In comparison, the USGBC confirms that 30 to 40 percent of raw materials used in a conventionally built wooden house ends up in landfills. Kappe’s design for the model home includes a living roof—planted with greenery for insulation—solar heat, and a steel frame to resist mold and insect infestation.

Since EPA studies have found that levels of about a dozen common organic pollutants are two to five times higher inside homes than outside, and many of those compounds are suspected or known to cause cancer in humans, reducing their presence has been a major consideration in LivingHomes designs. An automatic vent in the garage vents CO2 for instance, and the plywood, millwork, and paints have few if any volatile organic compounds about which the EPA is concerned.

One of the biggest impediments to green construction is price, and Glenn acknowledges that the Kappe design is not affordable housing. But Hertz’s models cost from $150 to $250 a square foot, not including foundation, transportation or installation. “That makes them moderately priced for the L.A. area,” Glenn wrote in an e-mail.

Glenn has a history of successfully tackling tough problems. In 2002, his former boss Ira Magaziner ’69 asked him to help with the Clinton Foundation’s HIV/AIDS Initiative. As a volunteer, Glenn spent a year and a half managing the project in Mozambique. Glenn sees a connection between that work and his current quest to build neighborhoods for people dedicated to reducing their impact on the earth. “I hope we inspire others,” he says. “I hope we are able to successfully wed profit and purpose.”