In early October, as if out of nowhere, an immense pile of brush appeared on the Front Cam-pus—the kind of thicket that makes you wonder if a tree had come down overnight. 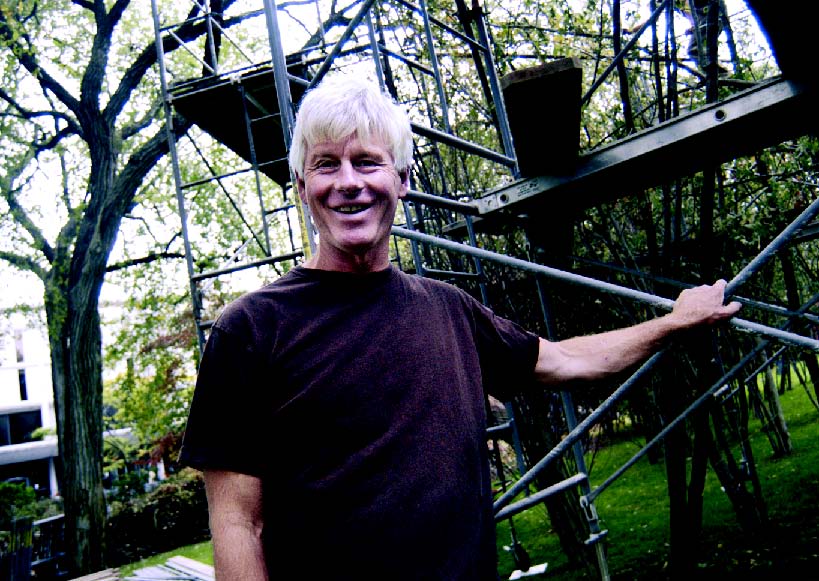 Before the pile stood Patrick Dougherty, a lanky sculptor with a thick shock of white hair, a plaid flannel shirt, jeans, and heavy, well-worn leather gloves. He explained that he was weaving the branches into the shape of blocks, which would appear to tumble across the grass among the elms. As he demonstrated how he anchors the corner branches like fence posts, a half-dozen students wheeled up on bicycles, which they tied to another elm tree with bungee cords. The students were helping Dougherty with his latest installation, a sculpture that will stand in front of Slater Hall for the next year or two—or three—until nature renders it too ragged to stay.

Dougherty is an itinerant sculptor of sorts who travels around the world weaving basketlike installations for a fee of $14,000 plus expenses. He was invited to Brown by the Committee on Public Art, having built a similar sculpture at Smith, where President Ruth Simmons was among its admirers. 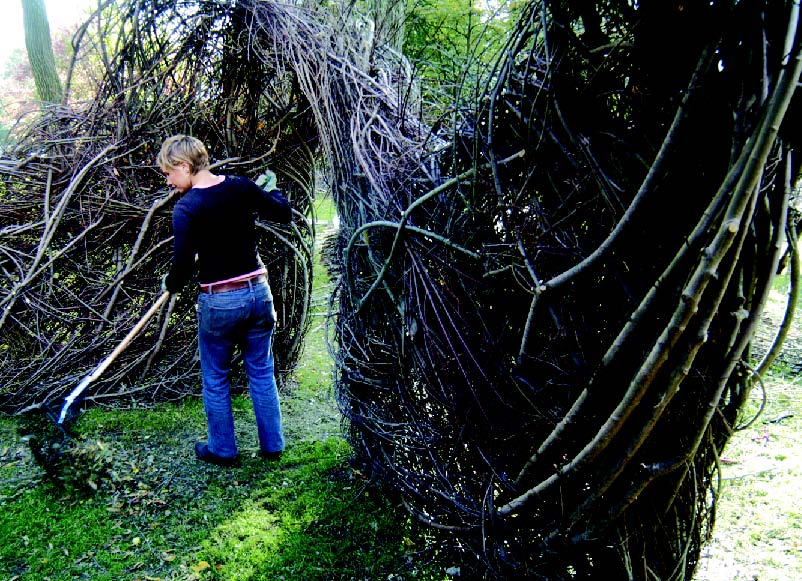 “The maple are the reddish color, and the willow are green,” explains Jo-Ann Conklin, who runs the Bell Gallery and masterminded the project. Some of the brush for the project came from an East Providence site slated for development, and some came from a landscaper who’d cleared land five years ago, never planted it, and consequently had a nice stand of flexible young growth.

“We all became expert at bending, to see if the branches could be woven,” Conklin says.” She also handled the paperwork, including permissions, no small task in a city. The piece couldn’t be located too near buildings, she says, and it is treated with fire retardant.

A week or two after Dougherty and his student apprentices had begun weaving, the bones of the boxes were already becoming indistinct, as they were entwined with canes that swirled around them like bittersweet vines. By the end of the month, giggling children ran among the blocks, poking their heads in and out of porthole-like windows and playing hide and seek. They looked like gnomes in a hobbit house, and passersby grinned and giggled to themselves. Art can do that to you.