Having been spurned, denounced as an Islamophobe, hailed for her courage, and then invited but with some reservations, Nonie Darwish finally arrived at Brown.

The Arab American activist, who has ignited controversy for her ardent support of Israel and denunciation of the Muslim world, spoke in early February before a packed crowd in Salomon Center that either loathed or loved her. There seemed to be no in between.

“She makes pretty blatant Islamophobic remarks,” said Margaree Little ’08, one of several protesters gathered outside the building before Darwish’s speech. “We would also be out here if Brown decided to sponsor a Holocaust denier or KKK member.”

“I thought she presented her argument very clearly, very well,” said Matt Reichel ’09. “I agree with her stance that the Arab world needs to be reformed.”

Darwish grew up in Egypt and the Gaza Strip. Her father, Mustafa Hafez, headed the Egyptian military intelligence in Gaza and the Sinai in the 1950s, when both were under Egyptian control. Darwish said he was assassinated by Israeli agents when she was eight. And yet on the Israeli-Palestinian conflict, she stands firmly in support of the former.

“I have empathy for Israel, a country that deserves our respect, not our hatred,” she told the crowd. “Being pro-Israel does not mean being anti-Arab.”

The fifty-eight-year-old Darwish said she had led a quiet, contented life before 9/11, but then felt compelled to speak out about what she saw as the “archaic and oppressive” ideology running rampant in the Islamic world. “I went to Gaza elementary schools and learned a lot of hate,” she said. “Those who wanted peace and compromise were considered traitors.” “They simply filled our hearts with hatred of Jews,” she added. “When you do that ... terrorism becomes acceptable.” 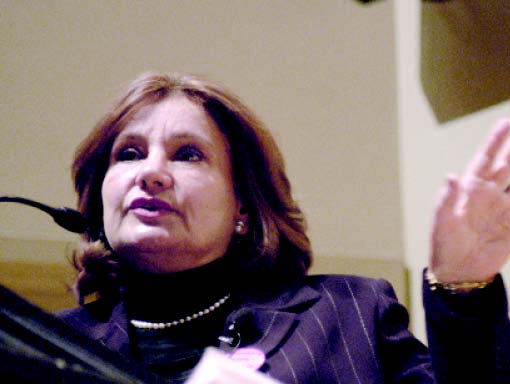 The author of 2006’s Now They Call Me Infidel: Why I Renounced Jihad for America, Israel, and the War on Terror, Darwish has been most vocal about the way women are treated in the Arab world. “Arab women are expected to sacrifice for their family, their husbands, and their sons, but they are given no respect as women who want to live their lives,” she said.

Darwish was originally invited to campus last fall by Brown Students for Israel (BSI), a student group that according to its Web site has the mission of “promoting pro-Israel activism on campus.” BSI then asked both Hillel and the Sarah Doyle Women’s Center to help cover the $2,700 needed to bring Darwish to campus, but the discussion with the Center “never really came to any closure,” says Interim Vice-President for Campus Life and Student Services Russell Carey ’91, ’06 AM.

Hillel’s student leaders then balked, saying it did not want to be the sole sponsor of the event. In a written statement, president of the Brown Hillel Board of Trustees, Fred Horowitz ’86, said, “It was the students who understood the difficulty in Hillel’s sole sponsoring a speaker who has made many anti-Islam statements. Although I would enjoy hearing Darwish speak at Brown, or anywhere, we must remember that Brown Hillel is not anywhere. Our student leadership has built a unique relationship with the Brown Muslim community.”

It was at this point that several conservative newspaper columnists got wind of what had happened and began accusing Brown of suppressing free speech. In a November 19, 2006, editorial in the New York Post, columnist Adam Brodsky wrote that Brown had caved under pressure from Muslim students who opposed Darwish’s views. “Weird: No one had said boo about such Brown events as a patently anti-Israel ‘Palestinian Solidarity Week,’” Brodsky wrote. (The Muslim Student Association denies it ever opposed Darwish’s appearance).

Carey said he first learned Darwish had been invited to campus from the NY Post piece, but then contacted members of Brown Students for Israel and offered to have Brown sponsor the event. “Freedom of expression and freedom of speech are the core principles,” Carey said in an interview. “This is a place where all different voices can be heard, questioned, challenged, and debated.”

The crowd at Darwish’s lecture was far more boisterous and unruly than usual for a Salomon Center event. During the question-and-answer period, students delivered long denunciations of Darwish’s ideas while audience members screamed out for them to ask a question and get to the point. Urging civility, the evening’s moderator, political science professor John O. Tomasi, told the audience, “You remember that middle school was a long time ago, but now we’re doing the adult thing.”