When Richard Wiese first stepped into the century-old Explorers Club shortly after college, he felt as if he'd made a great discovery. "It was like this beautiful dinosaur that no one knew existed," he says of the club, a dim place of red leather and oak paneling on New York's Upper East Side. It was also on the brink of extinction - its membership aging, its funds drying up, its public events poorly attended. That Wiese, a hunky former model turned television journalist, would show up there in the first place - and for a lecture on northern New Jersey's black bears - may seem odd. That he would, in 2002, become the youngest president in club history is still odder. Yet his commitment to the group and its ideals runs deep. 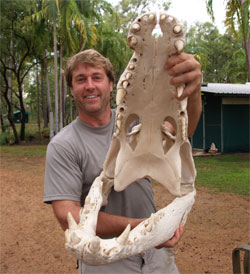 John Barnhardt
On the hunt in Australia for the world’s largest crocodile, Wiese encountered the skull of a (once) 20-foot-long contender.

Wiese's father was an explorer of the old school, flying solo across the Pacific Ocean in 1959 and jetting his family to such places as Liberia and Senegal for three-day weekends. He also brought his 11-year-old son on a trek to the top of Mount Kilimanjaro, "which is sort of unusual," says Wiese, who grew to worship such adventurers as Sir Edmund Hillary, the club's honorary chairman. So when Wiese was tapped for membership in 1989, he felt as if he was joining his pantheon of heroes. "I was so thrilled," he says.

Still, the top job at the Explorers Club has turned out to be significantly more challenging than climbing Kilimanjaro, which Wiese has now done seven times. At his first annual dinner as president, a member ran up to the stage and bit him on the hand for inviting astronaut Buzz Aldrin to speak. (The man thought the club should be supporting exploration on earth exclusively.) Others have objected to Wiese's methods of generating publicity, such as inviting scantily dressed models to club parties and joining with a wine company to bankroll free drinks at the Monday-night lecture series. But such tactics, developed with his director of communications, Jeff Stolzer '81, have worked: over the past four years the club has added 600 new members, whose average age has dropped from 67 to 59, and there's often a line out the door for public talks.

Yet of all his accomplishments at the club, the one he's most proud of is 2003's Central Park Bioblitz, which brought 500 scientists and students to the park to catalog every life-form they could find in twenty-four hours. Covered by media worldwide, the blitz vividly illustrated that exploration doesn't have to involve risking one's neck in a distant land. Just as interesting, perhaps, is taking a good hard look at one's own backyard, where up to 100,000 organisms can live in a single scoop of soil. Biodiversity expert E.O. Wilson of Harvard was so impressed with the event that he contacted Wiese about organizing blitzes in other cities. The two have since become friends.

As he recounted the story, Wiese held up Evolutionary Biology, Wilson's authoritative textbook, and laughed. As a freshman at Brown, he flunked a midterm based on the book. "In my heart of hearts, I could have never imagined being where I am now," he said. "You just have to chuckle at all the stages you dance on in life."

Reader Responses to Reviving a Dinosaur