The Mother of All Proms 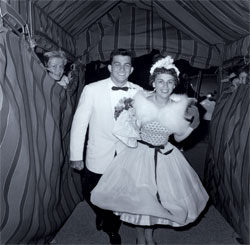 I boycotted my senior prom. or maybe it was cancelled for lack of interest; I honestly don’t remember. But after watching the winsome World’s Best Prom, I regret that earnest, sensible-seeming decision. The lesson of this unpretentious and often funny little documentary is that proms are anything but sensible. Proms give kids who are adult only in body a chance to play dress-up on the grandest scale many will ever reach. They allow teenagers to celebrate the end of high school while delaying real world angst. They allow hormone-addled adolescents to play bride and groom for a night—sort of a Vegas wedding without the Reno divorce.

The World’s Best Prom is about the prom to end all proms, the citywide, post-prom prom given each year by the Rotary Club of Racine, Wisconsin. It began in 1953, the year after a carload of local teens were killed in a prom-night crash. To keep kids safe, the Rotary Club planned an extravaganza for students attending all the local proms. The students, wearing dinner jackets and tulle-stiffened ball gowns, box-stepped their way around the dance floor, were served dinner and breakfast, and a tradition was born.

Fifty years later, Racine’s prom remains the biggest event in town. In 2000, when this movie was filmed, the whole city seems to have turned out to watch the parade of limos, eighteen-wheelers, and fire engines, all bearing tuxedoed and sequined teenagers, arrive at the dance. (One couple even arrives on an elephant’s back.) Like movie stars before the Oscars, the teenagers process down a red carpet under the glare of flashbulbs. Parents and friends cheer from bleachers flanking the entrance, while newscasters report the event live and TVs in sports bars and living rooms across town tune in.

These days teenagers can’t postpone real life for long, and in Racine their prospects are limited. In its heyday the city was an industrial magnet, the birthplace of such household staples as Johnson’s Wax and In-Sink-Erator garbage disposals. The parents of these students grew up with a bounty of factory jobs to pick from, but post-industrial Racine is struggling to build a high-tech economy. Unemployment is high; one high school senior (incorrectly) puts it at 10 percent. Three of the seniors profiled in the film say they’ve enlisted in the military. Dori Sorenson, a leggy blond who keeps a make-up mirror next to the computer in her bedroom, says she wants to go to college and then work in the fashion industry. Only Tonya Witherspoon, an aspiring forensic pathologist, plans to attend college out of state, and at the end of the film we learn she’s now pursuing a master’s in criminal justice.

But first, prom night. Tonya, who’s attending with her ex-boyfriend, has gone to Chicago to buy a long, white, silver-sequined halter-top gown and silver sandals with heels like skyscrapers. Prom day she spends five hours getting her hair straightened, then goes home and curls it into ringlets. Dori, heading to the manicurist the morning of the prom, explains that she’s having her toenails painted silver. Having had a miserable time at the prom the year before, this year, her last in high school, she asked a friend to set her up with a boy she thought was cute (he also had a nice car). “That sounds superficial,” she admits. “I guess it is superficial.” This year Dori hoped to wear a white, princess-like gown and arrive by Hummer after dinner at a fancy restaurant. But things didn’t work out that way. The boyfriend was fine, but after trying on “hundreds” of dresses in every mall in southern Wisconsin, she settled on a slim black gown. “It’s okay,” she shrugs. The Hummer eluded her, too, and the restaurant idea proved too expensive. In the end, a friend’s parents offered to host a dinner, which an aunt is cooking. She’s making chicken breasts, Dori notes a little sourly, and the kids are paying four dollars apiece.

The afternoon before the prom, quarterback Ben Adrian’s jock friends come by to get dressed together. The bedroom can barely contain these burly boys as they struggle into their rented tuxedos and wrangle with their pre-tied bow ties. Ben earnestly watches himself in the mirror as he spikes up his crew cut with hair gel.

Reader Responses to The Mother of All Proms