For a couple of years after college, Jeff Zimbalist wandered from one project to another. He worked in Katmandu with a development group, taught filmmaking in Maine, and edited documentaries in New York City. While eating lunch with a student one day in the summer of 2002, Zimbalist mentioned that he thought the media overemphasized negative news about developing countries. He wanted to combine his interests, he said, and make a film about a community struggling against great odds. 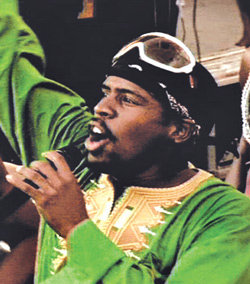 VOY Pictures
Since Anderson Se started AfroReggae it has reached 2000 of Rio's youths.

A week later, the student, Matt Mochary, called Zimbalist from a conference in Brazil. He said he'd found the perfect subject for Zimbalist's film: a group of musicians calling themselves AfroReggae were wooing kids away from a life of drug dealing and banditry in Rio de Janeiro's most violent favela, or slum, in the hills above the city's lush beachfront.

An entrepreneur who had made money in the high-tech boom of the '90s, Mochary offered to fund the first phase of a collaboration. So Zimbalist packed up his cameras, tripods, light kits, and a laptop loaded with video-editing software, and he took off for Rio.

The son of an economist specializing in Latin America and a novelist and visual artist, Zimbalist was in his element. He'd concentrated in art and semiotics at Brown, and had spent his junior year in Chile.

To make the film, he spent two and a half years in Rio, living in the slums with his subjects for weeks at a time. He gave Mini-DV cameras to teenagers and taught them how to shoot. Over that time, he gained the trust of a community that had been brutally repressed by both police and teenage drug-trafficking armies. Zimbalist shot the film, mixed the sound, designed the graphics, and edited 180 hours of footage into Favela Rising, a haunting and ultimately inspiring eighty-minute documentary about the non-profit group AfroReggae.

The story took an unexpected twist when a fluke accident nearly killed its protagonist, a drug-dealer-turned-community organizer named Anderson Sá. Zimbalist says he hesitated to take out his camera when he found Sá hospitalized, in danger of being left quadriplegic. But Sá, barely able to talk, told him to record the bad along with the good. During the editing, Zimbalist took the unusual step of welcoming suggestions from his subjects, including Sá. "It felt wrong for me to represent a culture that I knew so little about, to go in and take what I needed out of context," Zimbalist says. "I treated the subjects as friends first, and characters second."

Last spring, Favela Rising was selected from a pool of hundreds of new films to debut at the Tribeca Film Festival. The film generated so much buzz that crowds had to be turned away from screenings. On the final day of the festival, the judges announced that Zimbalist and Mochary had won the Emerging Documentary Filmmaker Award, which carries a $25,000 prize. In July, the film won the best documentary award at Honolulu's Cinema Paradise Film Festival, and a month later it won the same honor at the New York International Latino Film Festival. At one screening after another, judges praised Zimbalist's extraordinary access, his intimate storytelling, and his startling images of violence and reconciliation.

Distributors have taken notice. Zimbalist weighed several offers before choosing HBO's; after screenings at more film festivals in the fall, the film will air on the cable channel this winter. He is donating the profits to AfroReggae's education programs. In addition, he is showing the film across Latin America, hoping to inspire people to organize in their communities and keep their children in school. And, moving on, Zimbalist is busy launching another project: a documentary about a worker uprising at a Coca-Cola plant in Colombia.

Reader Responses to Occasionally, Nothing Really Does Succeed Like Success