Ruth Simmons first felt the pressure when she was growing up poor in Houston during the 1960s. Although those around her delighted in her interest in books, many weren’t as pleased when she announced her intention to study literature and Romance languages in college. 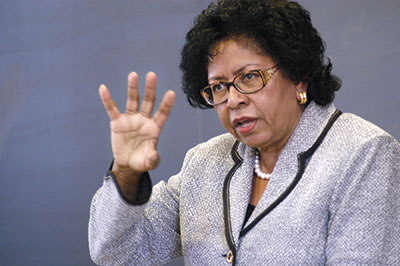 “From when I was a girl to graduate school,” she told an audience in Smith-Buonanno Hall on April 9, “people told me, ‘Do something constructive. Go to law school. Study sociology.’ ” The underlying message seemed to be that the humanities are for people who are rich and white and that, as Simmons said, “humanistic values are often at odds with a practically oriented public.”

Delivering the Inaugural Invitational Lecture sponsored by the Cogut Center for the Humanities, Simmons argued that the humanities are as essential as the sciences to understanding our world, but that proponents of the humanities have done a lousy job of advocating for their own strengths: “The lack of show-stopping breakthroughs can give the humanities the appearance of a wallflower at the ball.” As a result, Simmons said, the accepted view is that CEOs and other leaders succeed “despite their background in the humanities. In fact, this background was essential to their success.”

Unfortunately, Simmons said, humanities research is, as she put it, “sometimes abstruse.” It can be self-referential, she added, and “sometimes collapses on itself.” Humanists must take responsibility for the usefulness of their work, an idea that Simmons admitted is controversial.

She described an English professor at Smith who approached her for support while she was president of that school. “He thought his voice could help in Darfur,” Simmons said, “and he became one of the most prominent voices writing about the genocide there. He used language in the tradition of Zola. He unmasked the indifference of so many regimes about this genocide.”

Reader Responses to How to Live