Each year nearly 180,000 women learn they have breast cancer. According to biostatistics professor Constantine Gatsonis, before these women even consider treatment options they should receive a magnetic resonance imaging (MRI) test of the opposite breast. 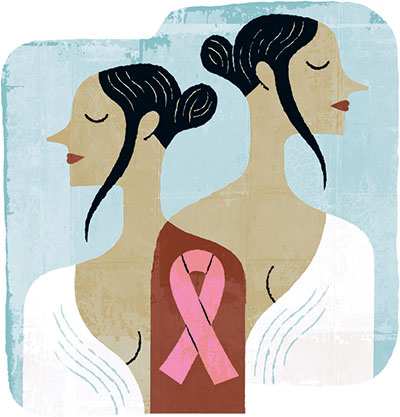 Timothy Cook
Gatsonis designed and coauthored a major study of cancer-detection tools whose results were published in the New England Journal of Medicine this spring. Prompting the research was the knowledge that as many as ten percent of patients with cancer in one breast develop the disease in the opposite breast. Gatsonis wanted to know how best to find those patients. His study concluded that MRIs are much more effective than any other screening method. In fact, the detection rate for MRIs was 90 percent.

The study was funded by the National Cancer Institute and was overseen by the American College of Radiology Imaging Network (ACRIN), whose biostatistics center, based at Brown, is run by Gatsonis. To gather their data, Gatsonis and his colleagues enrolled 969 women at twenty-five sites in the United States, Canada, and Germany. Each of the women had been diagnosed with breast cancer and had had her opposite breast declared disease-free by physical breast exams and mammograms. Within thirty days of diagnosis, the women followed up with MRIs, which found additional cancers in thirty cases. The MRIs missed two cancers and flagged many other anomalies that turned out to be benign.

The study was published on March 28, the same day the American Cancer Society announced its recommendation that women with a high breast-cancer risk be screened with both annual MRIs and mammograms. Many news reports conflated the two medical stories, creating confusion.

To clarify, Gatsonis points out that the cancer society’s recommendation of MRIs as a general screening tool applies to healthy women with a family history or genetic likelihood of breast cancer. His ACRIN study, by contrast, is relevant only to newly diagnosed breast-cancer patients; its aim was to see which diagnostic tools worked best at detecting opposite-breast cancers in women who have already contracted the disease. The study did not recommend that MRIs replace self-exams or mammography for breast-cancer screening.

Still, he says, the study’s design was simple and the results are clear: “If my wife were diagnosed with breast cancer, I’d be sure that she got an MRI of the opposite breast.” —C.B.H.