An investigation into a March altercation between campus police and two black students has concluded that the incident was not triggered by racial profiling ("ID, Please," Elms, May/June). 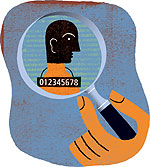 The March 13 incident began when Michael Smith '05 and David Williams '05 refused a security guard's request for identification, exchanging words with the officer and other officers who arrived later. The standoff ended in a minor scuffle and the students' arrest and brief detention.

Although the report by two consultants hired to look into the incident - one of them a former Harvard police chief - was not made public, President Ruth Simmons summarized its findings in a May 2 e-mail sent to faculty, students, and staff. According to the message, the consultants discovered inconsistencies in directions given by shift supervisors, as well as a number of unspecified "violations of department policy."

The consultants also found that Brown policy requiring students to present identification upon request "is not widely understood nor uniformly enforced." Simmons wrote in her e-mail that the University would likely implement a system to track "identification requests to enable us to monitor ourselves and to ensure that no stops are made in the future for discriminatory reasons."

Citing the "confidentiality of personnel records," Simmons declined to comment on what, if any, disciplinary action the officers involved in the altercation might face. As for Smith and Williams, Simmons acknowledged that their conduct was reviewed according to the University's nonacademic disciplinary procedures. But, she wrote, "Student discipline is confidential, and I will not violate that confidentiality by describing the specific outcome of that review."

Reader Responses to Under Scrutiny