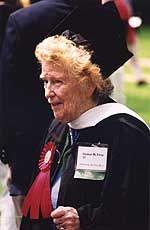 Eleanor McElroy prepares to lead the women of '37 down College Hill.

Eleven members of our class returned to Brown for our sixty-fifth reunion. (We now have sixty-six members on our roster.) Bill RyanJohn Manchester and Jim Beale from Florida; Parker Halpern from Virginia; and George Toelken from Connecticut. All agreed it was worth the trip.

Housing quarters were good, though one of our group took a shower in the ladies' area - no names mentioned. Friday's dinner (at the Sharpe Refectory) and Campus Dance proved there is a lot of life within our group.

Saturday at the Hope Club was a great chance to be together by ourselves. Jack Skillings and I were both reelected to our jobs. Jack talked about our scholarship fund, which provides $5,000 each year to a deserving student. That night we had dinner with the women from the class of '37. Even though we never officially joined together, we enjoyed one another's company.

Sunday morning there was an all-class memorial service in the college chapel. Jim Beale represented our class. Brown alumni who died on September 11 were singularly honored. That afternoon, Charlotte and I had a picnic at our house for the class.

On Monday morning, Jim Beale, Jack Ryan, John Manchester, Jack Skillings, and F. Hartwell Swaffield marched down the Hill behind our class banner - a proud time. We had lunch at the refectory and departed on our own ways.

Rather than wait five years for our next official reunion, we will try it one year at a time. I fell and hurt my back a week ago, which limited my physical participation. I'm getting better now.

After many months of talk, our sixty-fifth reunion has come and gone. We're already looking forward to the next official one.

We started the weekend with the Brown Bear Buffet. The men and their wives joined us, adding to the jolly atmosphere with lots of laughter and storytelling. Our big event was the class luncheon sponsored by Dorothy Brown on Saturday at the Wannamoisett Country Club. Everyone received a live potted plant and a print depicting the class of '37 by the campus gate on Waterman Street near Hope College. We also received a potted paper rose made by Anna Lyons-Goulet.

Saturday evening we joined the men and their wives at the Faculty Club before going to the pops concert. The music was enjoyable, and the Green was as beautiful as ever, but I have never been so cold, even in our skiing days. Blankets were in sight and were prize property. I hate to admit it, but I departed at intermission along with many others.

On Sunday the hour with our new president was memorable. President Ruth Simmons was truly spectacular. Her plans for Brown's future are reaching new heights. May they all come true.

The Commencement march on Monday was the highlight of the weekend. As class marshal, I led our class, followed by banner-bearers Marian Martin McGowan, Pat Warner Kershaw, and Dorothy "Dot" Pickett Priestman. Mary Louise Record was there in her wheelchair. Our class was just behind two major attractions: a gentleman from the class of '22 in a tall silk hat, like Lincoln's, and Ruth Ross '32, who enjoyed all the applause she received. They stole the show, so '37 didn't get all the attention eighty-year-old folks might have had. But we smiled and marched on.