In his last Web site update, dated 7/11/04, David Yazbek wrote: “I’ve got a new album in the planning stages, but who knows when that will happen. I’ve got to tell you, my ambivalence about my sudden transformation into ‘Broadway’s David Yazbek’ hasn’t receded an iota in the last few years.” The rock-pop songwriter/performer, who has spun off a critically acclaimed career as a Broadway show composer, has also been quoted as saying that his Tony-nominated score for The Full Monty has “practically erased whatever alternative cred I had built over the years as a recording artist.” 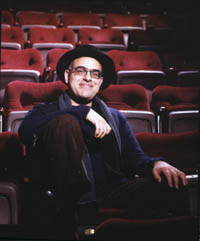 Yazbek laughs when reminded of these statements. Although he’s recorded albums, toured occasionally, and even amassed a cult following as a musician, he started out as a comedy writer on Late Night with David Letterman and says he’s “always paid the rent by writing scripts and music for TV.”

He laughs again and adds, “Actually, I think of musical theater as another frontier I can bring my voice to.”

Yazbek returns to Broadway this spring with a musical adaptation of the 1988 film Dirty Rotten Scoundrels, in which Steve Martin and Michael Caine played a pair of suave swindlers. For the musical, Yazbek collaborated with librettist Jeffrey Lane. During its test run at San Diego’s Old Globe Theater last fall, one critic wrote that the musical triumphed with “a sashay in its step and a merry twinkle in its sensibility.” Starring John Lithgow, Norbert Leo Butz, and Sherie Rene Scott, Dirty Rotten Scoundrels, newly tweaked, opens at Broadway’s Imperial Theater in March.

Unlike The Full Monty, which fell into Yazbek’s lap when director Jack O’Brien enlisted him to compose the music, Dirty Rotten Scoundrels was Yazbek’s own idea. After watching the film on TV one day, he began thinking it would make a good musical. “It became clear to me that I wanted to live in that world of conning characters and their twists and turns,” he says. Although he liked the film’s humor, he felt it lacked depth. “I knew there could be something more to these characters and their story that I could show in song,” he says. “As a composer/lyricist, I’m interested in character issues that I can express in music.”

His curiosity piqued, Yazbek called his agent to see if he could secure the rights to make the film into a musical. It’s owned by MGM, which had just opened a new division to license preexisting properties. They green-lighted the proposal.

Then, six months later, Yazbek, who lives in New York City, received a phone call from Lane, a writer based in Los Angeles. He, too, had been thinking about the theatrical potential of Dirty Rotten Scoundrels. They decided to work together.

In the show’s music, Yazbek stays true to the indelible melodies, keen observations, provocative metaphors, and absurd humor that characterize his albums (on his latest CD, Damascus, he glimpses Fuji blimps, celebrates cowgirls heading for Santo Domingo, and makes a leap of lyrical faith by connecting baseball hall-of-famer Sandy Koufax to the Holocaust). With Dirty Rotten Scoundrels, Yazbek shows himself to be a pop-music eclectic, equally at ease penning rockers with tongue-in-cheek lyrics (including the high-energy “Great Big Stuff”) as he is in crafting a heartfelt ballad (“Love Sneaks In,” sung by Lithgow).

“I enjoy clever lyrics and internal rhymes and love the theater music of Cole Porter, Noel Coward, and Ira Gershwin,” Yazbek says. “I love the grand elegance of orchestration, but I also really enjoy vulgarity.”

What’s next after Dirty Rotten Scoundrels ? Yazbek says he’d like to stay in musical theater, but in a more experimental way. “I want to try something new. With my albums, I say exactly what I want without having to deal with characters. I’d like to write something that’s perhaps less commercial, but that reflects me in a pure way.”

Dan Ouellette is the New York City–based jazz columnist for Billboard, a contributing editor to Stereophile, and a longtime Downbeatcontributor and columnist.