"Find your energy hot spot,” Chris Elam instructed, “and focus on it as it spirals through your body.” Sprawled around him on the studio floor, students tentatively lifted arms, shrugged shoulders, rolled necks. There was not much spiraling in evidence. “Be wary of just undulating in all places,” he warned. “I’ll demonstrate.” 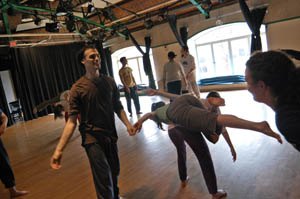 An El Greco–ish young man with the body of a contortionist, Elam sat erect and drew his right arm out before him. You could see the motion begin in his fingertips then glide across the back of his hand and up his arm. From there it rippled across his shoulders and down his other arm. It was electric—and a little weird.

Elam is one of a handful of alumni back on campus this year teaching as adjunct faculty in theater arts. His course has a ponderous title: Improbable Partnering and Exceptional Physical Interaction. But its structure is simpler.

Once a week he travels to Providence from New York City and rehearses with nineteen students,“building a dance on them,” he says. He’s choreographing a work they will perform this spring. Weekly workshops focus on building facility and technique. Unlike conservatory students, this group comes from a wide range of academic departments, and they range just as widely in body type, training, and ability.

Elam understands all that; he concentrated in public policy as a Brown undergrad, “with a lot of computer science,” he notes. After graduation he took off for Bali, where he studied topeng dance (he credits theater arts Professor John Emigh with inspiring that move, which has shaped Elam’s career profoundly). Topeng dancers wear masks and use sharp movements, Elam says. “They believe they’re embodying a god. To do it you have to commit to becoming a character, not just acting as one, on the stage.” 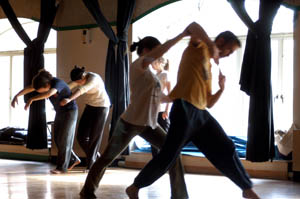 Returning to the United States, Elam enrolled in New York University’s Tisch School, where he earned his MFA studying ballet, modern dance, and choreography. Invited to teach in Istanbul, he took up dervishing. A dance commission in Cuba got him studying salsa.

All those influences have shaped Elam’s unique, and somewhat bizarre, physical vocabulary. “Fusion doesn’t begin to describe what’s going on here,” Elizabeth Zimmer wrote in the Village Voice after his company, Misnomer, completed its first New York season. Misnomer, she raved, “hit town with a force I haven’t seen since the early days of Mark Morris.” She and other critics praised the company’s humor and humanity, its playfulness and grotesqueries, its contortions and pathos.

“You have to be as creative about how you build a company as the art,” Elam says. Describing himself as the company’s nexus, he manages everything from its choreography to its publicity. This year he’s also teaching master classes at Harvard, the Boston Conservatory, and other schools. While at Brown, he’ll perform twice, and Misnomer will dance in New York City in late April, then next summer as part of the River-to-River Festival.The Improbable Partnerships class will show its work at the annual spring dance concert in May.

For more about Elam, visit misnomer.org.