Blowing Out the Spaces

Billie Tsien ’71 describes architecture as “an act of profound optimism.” She and her partner-husband, Tod Williams, known for their design of the American Folk Art Museum in New York City, also tell clients: “We build from the inside out.” Both mantras should come in handy as the New York City–based pair tackles its latest project: a museum and educational center to house the multibillion-dollar Barnes Foundation art collection in downtown Philadelphia. The partners beat out five other architectural luminaries for the commission, including Tadao Ando of Japan, Diller Scofidio Renfro of New York, and Thom Mayne of Los Angeles. 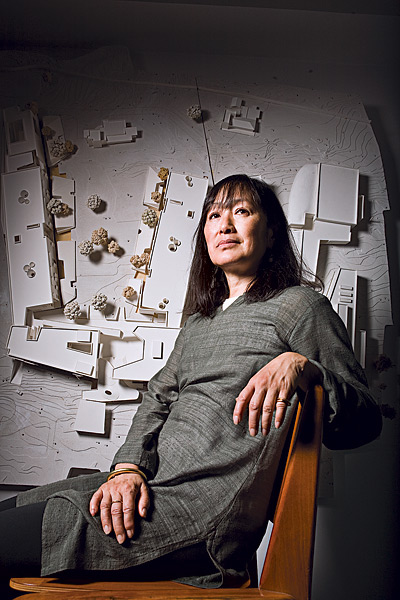 Derek A. Gillman, president and executive director of the Barnes Foundation, praises Tsien’s and Williams’s buildings as embodying both functional- ity and craftsmanship. “They have a very rigorous and clean way of thinking about building layout and function and spaces and flow,” he says. “It’s a rich experience to be in any one space in their buildings, and also to move through them.”

Tsien called her team’s approach “a kind of enriched, more intuitive form of modernism.” “We start with the inside, the habitation, the human issue,” she says. “To be an architect is a great gift. With that gift also comes huge responsibilities, and we take that very seriously. We’re always pursuing projects that we feel make a good mark on the earth.”

While the Barnes represents a “major, major commission,” Tsien says, the $100 million undertaking is both controversial—two lawsuits have been filed to halt the collection’s move from its original home in suburban Merion, Pennsylvania—and hedged with restrictions. In a 2004 decision overriding collector Albert C. Barnes’s written instructions, a judge permitted the artworks’ relocation, but not any change in the way the paintings and decorative objects were arranged to illustrate Barnes’s aesthetic theories.

That means the architects must replicate the Merion galleries—designed in the early 1920s and stacked to the ceilings with Cézannes, Renoirs, and Matisses—within a larger, user-friendly museum. For inspiration, Tsien says she is looking both to other house museums and to the Barnes’s own well-respected horticultural program.

“Right now the Barnes is a building in a garden,” she says. The urban Barnes, she suggests, could be “a garden in a building.” The Philadelphia Inquirer reported that Tsien and Williams presented a plan to “blow out the spaces between the walls” of the galleries and transform them into “landscaped courtyards and gardens,” but Tsien cautions that no real design work has yet been done.

Tsien has always been a pioneer. A first-generation Chinese American, she studied fine arts at Brown but chafed at the traditionalism of a campus “just on the cusp of change”—where female students wore suits and chrysanthemum corsages to football games. For her junior year she transferred to Yale, which was admitting female undergraduates to the college for the first time, to join “the adventure of being part of the first group of women at a school that had always been male.”

In addition to the American Folk Art Museum, Tod Williams Billie Tsien Architects is responsible for the recent expansion of the Phoenix Art Museum; the Neurosciences Institute in La Jolla, California; and, at UC Berkeley, the Chang-Lin Tien Center and C.V. Starr East Asian Library, which opened October 20.

At the new Barnes, Tsien and Williams will seek to “pair intimacy with accessibility,” while working within court-prescribed boundaries. “It’s the edges that give you something to react against,” Tsien says. As for the continuing legal challenges, “We are,” she says, “optimistic.”

Julia M. Klein has covered the Barnes Foundation for the New York Times and the Philadelphia Inquirer.

Reader Responses to Blowing Out the Spaces