What If It Happened Here?

Five months after Virginia Tech student Seung-Hui Cho killed thirty-two people and then himself, a weeklong rash of seemingly random violence and threats of violence struck other campuses. A Delaware State freshman shot and wounded two students. Officials at the University of Wisconsin locked down several buildings after a man threatened to kill himself or be killed by police. A University of Arizona freshman was charged with stabbing her roommate to death, and an Ohio University graduate student was accused of murdering his father, also by stabbing. At St. John’s University in New York City police arrested a masked gunman carrying a rifle; eight minutes after administrators learned of the event, a text message alerted the campus. 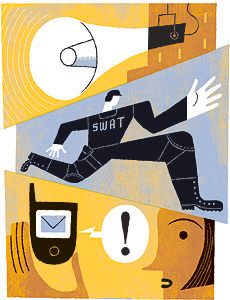 Timothy Cook
While Brown has remained violence free, the events elsewhere drew attention to the University’s efforts to protect students, faculty, and staff. Ever since the 9/11 bombings raised Americans’ awareness of their vulnerability to attack, Brown administrators have been scrutinizing the campus’s emergency preparedness, adding new policies and systems.

One of those is the mass-alert soft- ware system that St. Johns implemented this fall, says Walter Hunter, Brown’s chief risk officer and vice president for administration. The entire campus by e-mail, text message, cell phone, landline, and fax. “I can reach more than 16,000 people almost instantly,” Hunter said. A test this fall reached the campus by e-mail in eight minutes and eighteen seconds. Phone alerts will be slowed by cell tower capacity. “You’re not going to16,000 cell phones ringing simulta- neously,” he says. This fall Hunter asked employees and students to register their cell-phone numbers. Sixty percent of undergraduates and staff complied. Brown is installing an outdoor siren and public-address system that can be heard across the campus. Initially neigh- bors balked, fearing it would be over- used, but the University has reached an agreement with College Hill neighbors and the Providence city council, Hunter says. He expects the siren to be working the semester’s end.

University officials are also seeking help off campus. Brown’s police officers are all Rhode Island Police Academy, and they have been working closely with Providence police to plan joint responses to emergencies. LastBrown’s Code of Student Conduct, which all students are required to read before matriculating, prohibits students from bringing weapons on campus. In September administrators stressed that rule in both graduate and undergraduate orientation. Margaret Klawunn, the asso- ciate vice president and dean of student life, says her office is striving to make students aware of existing emergency procedures and systems; “We’ve focused on promoting what was already in place.” One particularly worrisome aspect of the Virginia Tech shootings was that a faculty member troubled by Cho’s writings was unable to get him psychiatric treatment. Brown hired a fulltime psychiatrist two years ago. To tighten the safety net for students who might present a danger to themselves or others, student-life and aca- demic deans have been trying to improve lines of communication among faculty, psychological-services staff, resident peer leaders, teaching assistants, and others who interact closely with students. One result is a joint Web site, which is under construction. “We’re trying to make things more transparent,” Klawunn says. “We’re telling people how to refer students and what to expect from the referral.  Find more information at www.brown.edu/emergency

Reader Responses to What If It Happened Here?