The author of Turtle Feet talks about being a monk, falling under India’s spell, and re-learning how to live in the West.

Why did you write this book? Basically as an homage to Tsar and to understand myself. It's a huge deal to change your name and your identity and to be so fully invested in something. This book is definitely an attempt for me to excavate what happened. 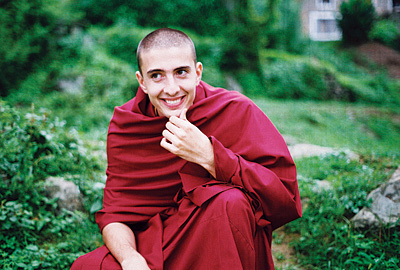 What did happen? I was trying for enlightenment, but I was stuck with this guy—for good or for bad—who was completely crazy. It was like John Lennon's idea that "life is what happens while you're making other plans." Living with Tsar created a lopsided experience of Buddhism and of being a monk. He created this notion that everything was very unreal in a way that was stronger than the teaching itself on how things are unreal. He had a transcendental persona and filtered everything through a prism that he had invented himself of what Buddhism is and what reality is. Supposedly the Indian Secret Service was chasing him. He stayed locked up in his room for four or five months. I never saw anyone chasing him.

Did you wonder if he was a sage? Of course! I still do—you never know.

You describe a kind of Kerouac-like fraternity. I wasn't used to that very masculine existence. Most of my friends were men. I wasn't even really allowed to talk to women as a monk. So my experience was very limited. I would never hang out with people like that or talk in the same way if I were in the U.S. or Bulgaria. These wouldn't be my friends. So it's very strange, almost exotic, for me to write from that point of view.

Why did you disrobe? I felt really uncomfortable with the hierarchy. I wanted to be a monk, but I wanted to be incognito and I couldn't be. I didn't want anyone to bow down to me.

Another thing that was really strong was that I started writing. I really felt that there was a lack of creativity, especially surrounded by three thousand monks every day going to debate in the morning and then the afternoon and then the night—listening to the same definitions, the same memorized arguments. It felt robotic.

So you weren't comfortable being a monk? Monasticism is a strange thing. A Tibetan family might have two daughters and three sons and they'll say one son is going to be the monk. From the moment he is born he is designated to be a monk. I had a sense that many monks weren't fulfilled. They have been sent by their parents to a place that they don't necessarily like but can't leave. If they leave there is a stigma: they won't get jobs; it'll be very difficult to find a wife.

How did you decide to leave? By the time I left, I was psychologically, emotionally, and physically worn down. I got deathly sick in Bodh Gaya and I almost died. It was horrifying. At the same time, it was very liberating. Because at that very last moment, I felt that it didn't really matter, that holding onto all these things that I was holding onto so hard wasn't that important. Life and death are larger than that.

What was it like returning to the West? I was twenty-six and had been in India since I was twenty-two. I was very naive. I had completely un-learned to live in the West. I didn't know how to drive a car. I didn't have an ID. I couldn't talk to people—I couldn't relate to them. But what helped me was writing. I channeled what I couldn't communicate with others into my writing. That is how I rehabilitated.

Tell me about India. India is something very special. I think I learned more from India than from the robes, the teachers, and even Tsar. The core of the Buddhist teaching is in the air. You can smell it. There is a relaxed sense that allows things to occur. If you allow yourself to feel it, it will be a much deeper feeling than just debating, or taking vows, or doing anything else. A friend of mine who visited Dharamsala put it this way: "It feels like even the mountains are meditating."