For reasons no one knows for sure, women from the Yoruba tribe of Nigeria are especially prone to giving birth to twins. Over millennia, spiritual beliefs and customs about twins have evolved in the tribe. Twins, for example, are considered good luck, but their supposedly temperamental dispositions may bring you disaster. 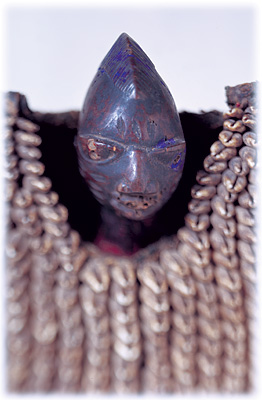 As part of its on-campus exhibit on Africa's religions, the Haffenreffer Museum of Anthropology is displaying its collection of ere ibeji, wooden figurines that serve as part of the Yoruba's mourning process after a twin dies. The ere ibeji pictured here dates from the early 1900s and is carved from satinwood. Its chest plate of cowrie shells symbolizes wealth.

Ere ibeji are given to a mother after one of her recently born twins dies. It serves as a substitute for the deceased child. Yoruba women carry the figurines on their backs, and dress, wash, and feed them all as if they were the living boys or girls. The goal is to placate the soul of the dead infant in the hope that it does not return to take the life of the other twin. Twins are thought to be ejire, or "two who are one," and separating them brings discord.

Though the sculptures themselves are beautiful, the circumstances for their proliferation in Yoruba culture are far less ideal: their society has one of the highest mortality rates for twins in the world.