They Raced Their Hearts Out—Again

Another year, another NCAA title for women's rowing. In the twelve-year history of the NCAA rowing championships, the Bears have claimed six team titles. They've never finished lower than third, a run no school in the country can match and a record few teams in any NCAA sport can surpass. 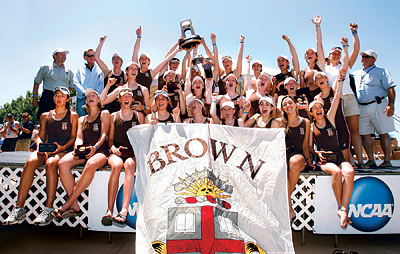 But don't take it for granted. The Brown coaches don't. "Every year is totally new," says John Murphy, the team's head coach. "[It's] a whole new challenge. There is never any talk about consecutive [wins] or anything like that. Each one is separate.

"Each one is a new quest. I don't think we ever use the word defending," adds associate head coach Phoebe Murphy, who is married to John.

At this year's championship on June 1 at California's Lake Natoma, Brown used a total team effort to outdistance Pac-10 powerhouses Washington and Cal for the title. The Bears finished third in the varsity fours, first in the second varsity eight, and third in the varsity eight to amass sixty-seven points. Washington placed second with fifty-nine, while Cal was third with fifty-three.

"It was definitely very exciting," says coxswain Sarah Wu '08. "Something that is unique to Brown women's crew is that we really value our team as a whole. So going to NCAAs and being able to win a team title is something that we look forward to and we strive for."

Entering the varsity-eight race, the Bears held a slight two-point lead over the Huskies and knew they needed to finish ahead of Washington and probably Cal if they wanted to win the team title. Washington had won the varsity fours and was third in the second varsity race. Yale, a school Brown had beaten at Eastern Sprints a few weeks earlier, also promised to be a strong competitor, as did Stanford, a crew the Bears had topped on the first day of racing.

"When we crossed the finish line in third," Wu says, "while it was kind of a bittersweet moment for us because we wanted to do better in our own race, we also knew that our team would be really excited and happy for us and that we did what we needed to do for the team title."

"They all did what needed to be done," John Murphy says of the varsity eight. "If there had been one weak spot, they would not have won the Eastern Sprints and finished third at NCAAs."

John Murphy is quick to praise Wu's management of the race and her handling of the team all season. "Sarah did an outstanding job," he says. "She is considered the top coxswain in the United States. She is mature, aggressive, and smart. She is an outstanding leader. She was in complete control at all times."

Wu was honored by the Collegiate Rowing Coaches Association (CRCA) as the only first-team All-American coxswain in the nation. Three other members of Brown's varsity eight also earned All-American recognition: stroke Emma Olson '08 and Jessica Stage '09 were named to the first team, and Corey Finnerty-Ludwig '09 was a second-team selection. John Murphy was named the CRCA Coach of the Year.

"The Murphys are very highly revered coaches," Wu says. "Their coaching style and their ability are admired by the entire rowing community."

"Coaches have said some nice things to us over the years," John Murphy says modestly.

Clearly, the Murphys' partnership works. While John coaches the varsity and Phoebe trains the freshmen, there is much more to it than that. Phoebe says John works on big-picture strategy while leaving the day-to-day management to her. However, the two agree on what moves a boat and makes it go faster. Their thoughts on workload are similar, too, and Phoebe's preparation of the freshmen helps them blend seamlessly into the varsity team.

"The Murphys coach through inspiration—just by being the people that they are and having the reputation that they do," Wu says. "Being able to row for them is enough to motivate us to do our best every single day and race our hearts out."

Gordon Morton covers sports for the BAM and has written a book on the history of Brown athletics.

Reader Responses to They Raced Their Hearts Out—Again