Bolted to the brick wall of Josh Boltuch's office at Amie Street music is a ladder leading nowhere. In Long Island City, Queens, where the company is based, such vestiges of manufacturing are common. But Boltuch's might be the only ladder decorated with record sleeves: a John Coltrane album sits above one from the 1990s neo-punk trio Rancid. 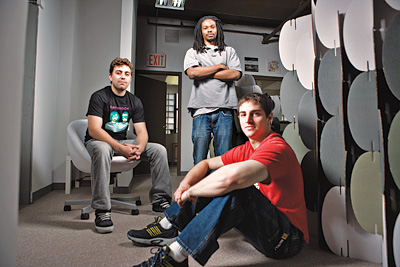 Conventional music industry wisdom would say that post-bop and punk-pop are separate niche markets. But Boltuch '06 and his colleagues at the Internet startup believe, "If we [had taken] music industry classes in college, we would have learned that we couldn't do what we're doing  right now.

"What they're doing is creating a new pricing structure for music downloads, an alternative to iTunes' one-size-fits-all business model.Boltuch '06 and his partners, Elliott Breece '06 and Elias Roman '06, who together founded Amie Street while the trio were seniors at Brown, have come up with a concept they call "variable pricing": when an artist uploads a song to amiestreet.com it starts off free and goes up in price as the song gains popularity.The price ceiling is ninety-eight cents, ensuring that a song on Amie Street will always cost at least a penny less than at iTunes.

"Our pricing doesn't look like anything else people have seen before," says Peter Asbill '06, head of content and acquisition, who is one of twelve alumni working at Amie Street. "So right off the bat, [industry] people are like, 'Why would I allow you to sell my music starting for free and then rising in price when iTunes is selling my stuff for ninety-nine cents a pop?'"

Amie Street is also a social-networking site where members recommend songs to one another. Members who tout free songs that rise to ninety-eight cents a download earn "street cred"—credit to buy music.

Brian Buchanan, the lead singer of the Celtic rock group Enter the Haggis, says Amie Street gives indie bands like his a chance to be heard. "Amie Street's unique pricing structure and recommendation system encourage new listeners to take a chance on your music, and positive user reviews translate into more sales," he wrote in an e-mail. "People pay more for music that's in higher demand, and less for music that has yet to prove itself popular with customers. Amie Street lets artists get back to doing what they're supposed to do—writing and recording great music. The better your music, the better it's received by the users, and the more songs and albums you sell!"

Boltuch says he often explains to wary record executives that the company does sell music. "We just do it in a way that is different because we think that empowering consumers, giving them the ability to have an effect on price, is a new and better way."

In interviews I conducted via Amie Street messages, several users described themselves as "addicted to" or "in love with" the service. One, who calls himself Craig H, wrote: "Music priced so you can get exposed to TONS of it, that returns more to the ARTISTS and not the business suits ... and that delivers it all in an incredibly convenient and flexible format ... is a winner by me."

Amie Street was born the way many Brown businesses begin: in one of professor Barrett Hazeltine's entrepreneurship courses. (Boltuch dryly sums up the genesis of the company: "Hazeltine. Independent study. A.")Breece, Boltuch, and Roman started discussing the idea during winter break of their senior year; two weeks into spring semester, they had incorporated the company. "It became our lives pretty quickly," says Boltuch. "We all pretty much limped to the finish line at Brown."

Over the past two years, the company has grown from three employees to twenty, and from a couple of dozen songs to almost a million. On March 12, the company received an unlikely publicity boost when a song by an obscure pop singer became the fastest-selling download in Amie Street history. The singer was Ashley Alexandra Dupré—aka "Kristen"—the escort of then–New York Governor Elliot Spitzer.

"We obviously can't claim any credit," Roman says. "She was an indie artist who appropriately used Amie Street as a platform. "

"You're being way too modest, man," interrupts Asbill. "We had a marketing plan to take down the governor of New York to get attention for our Web site. And we're working on our next project as we speak."

Andrew Marantz is a freelance writer in Brooklyn, New York.