Winslow Upton was a late-nineteenth-century Brown professor and the kind of astronomer who could write a musical titled The Observatory Pinafore. Among its lyrics were:

I read the thermometers, break the photometers,
Mend them with paper and wax;
I often lament that so seldom is spent
A fair evening on star parallax. 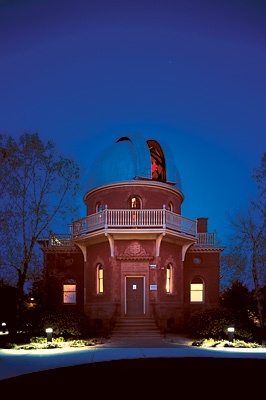 The Observatory Pinafore was last performed at a 1929 meeting of the American Astronomical Association; it's not clear whether that was its only performance as well. Upton, in fact, seems to have suffered from a kind of observatory envy, because he is best known as the professor who presented the administration with a simple ultimatum: build him an observatory or else he would quit.

And so in 1891, with the help of a $30,000 grant from Governor Herbert W. Ladd, the University erected an observatory, locating it on the highest point in Providence—a knoll at the intersection of Hope Street and Doyle Avenue that the locals called Tin-Top Hill because of all the old cans discarded there. Although the site is surrounded by houses and buzzed by Hope Street traffic, in 1891 it must have been quite a spot. You could stand there and look out on the entire city.

At the time, it was a state-of-the-art building, says Michael Umbricht, an astronomy assistant at Ladd and the Observatory's unofficial historian. Beneath its copper dome, it features a fifteen-foot-long refracting telescope with a lens ground by famed Pittsburgh craftsman John Brashear. An elaborate gear- and-pulley system, kept in sync by a clock beneath, enables the telescope to rotate at the same rate as the stars move across the sky. One hundred and seventeen years later, the telescope still affords astonishing views of the heavens. "On a good night," Umbricht says, "you can see the storms in Jupiter's atmosphere." 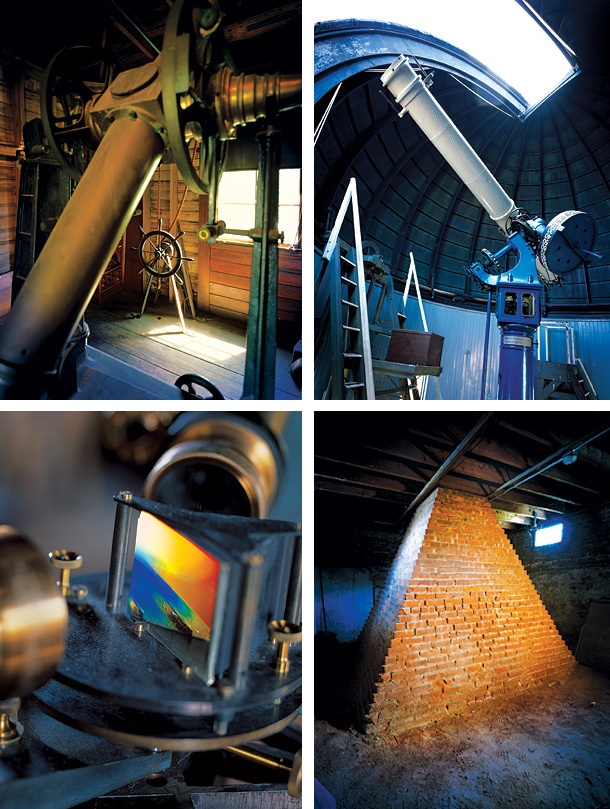 Clockwise from top left: A ship's wheel moves a gear that causes a slat in the roof to slide open for using the large telescope; The large telescope in the main dome; The measuring devise that helped scientists deduce the makeup of a star or planet by the colors they emit; Freestanding brick structure in the basement of the building that stabilizes and supports the weight of the main telescope.Photos: Erik Gould.

Though it's the rooftop telescope that draws the most attention, the observatory also has a much smaller telescope on the ground floor that performed an important public service. Every night—or at least when the weather permitted—an astronomer used it to track the stars as they crossed, and from those observations calculated the correct time. Every hour on the hour a signal would go out via telegraph wires to clocks around the city. The pulse would prompt the clocks' minute hands to jump to twelve, synchronizing them all to within a minute's accuracy. City agencies, local businesses, and train conductors all relied on the observatory's clock system. Ship captains docking in Providence hauled the portable clocks they used for navigation up the hill to synchronize them with Ladd's. "If your clock was off even by a minute or two, you might wind up shipwrecked," Umbricht says.

It was a remarkably long-lived function. In 1973, someone at Ladd called over to the fire department and asked if they still needed the time service. "What time service?" he was asked. Not until then did the observatory realize its role as timekeeper was no longer needed. The signals ceased. 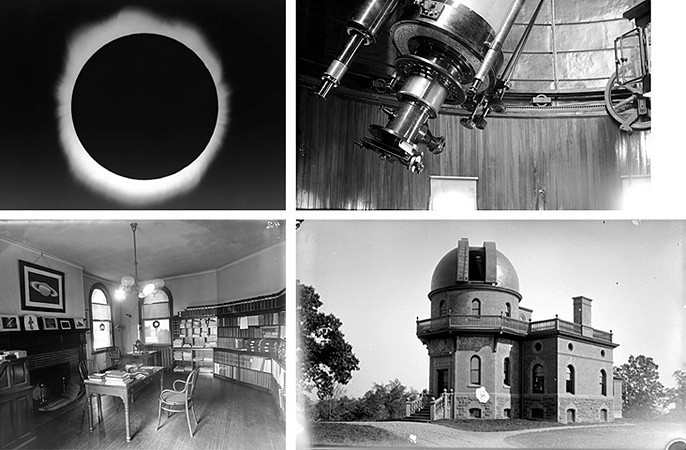 Clockwise from top left: An image taken from the observatory of the solar eclipse of June 24th, 1924; Telescope micrometer detail; The library room, circa 1898; Exterior of the observatory in 1904, printed from a glass plate negative.Photo: Brown Archives.

One other public service remains, however. Although introductory astronomy classes from Brown and students from local schools are the main users of the observatory these days, Ladd continues a tradition that began soon after the construction was completed: the observatory is open to all visitors every Tuesday night. No one knows how many scientific careers were launched on a fair evening by a first glimpse of the night sky through the Ladd's main telescope.