“In certain circles, it is far less problematic that I’m gay than that I’m a partisan Democrat,” Massachusetts U.S. Representative Barney Frank told a delighted student audience on October 6. “I wish both were better understood.” Frank quipped that “when I hear people say, ‘We need post-partisanship,’ I get post-partisan depression.” 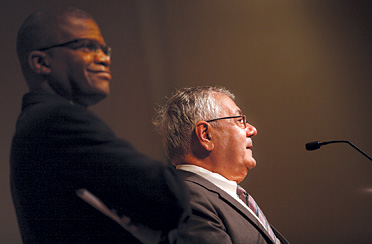 A week earlier, Frank, the embattled chairman of the House Financial Services Committee, had been instrumental in urging Congress to approve the $700 billion financial rescue bill, a bill made necessary, some Republican critics were already charging, because Frank and other Democratic financial leaders had been asleep at the wheel.

“It’s a messy bill,” Frank acknowledged, but he warned students not to confuse consequence with cause. “Our real job,” he said,  “is to make sure we don’t experience this again.”

The current economic crisis, Frank argued, is rooted in the rampant growth of financial innovations such as securitization and diversification in the 1990s, as well as in the federal government’s refusal to regulate them.

The whole notion of subprime mortgages is counterintuitive, Frank said: “If people can’t afford to pay you back, charge them more!”

The economy would be fine, he said, if regulated agencies such as banks were the only ones allowed to write mortgages. But former Federal Reserve Chairman Alan Greenspan refused to regulate the securities industry, and new securitization models were invented, all, said Frank, “based on the presumption that housing prices would continue to rise.” Which of course they didn’t. “This is the New Deal all over again,” he said.

Challenging the argument that a rising tide will lift all boats, Frank was characteristically blunt. “The economy is not a tide and we are not boats. It is entirely possible for the economy to rise and for most people to get poorer as inflation outstrips the economy. And if you’re standing on tiptoes in the water, a rising tide is not good news.”

During the question and answer session that followed Frank’s talk, a student asked how he thought three policies would fare should Barack Obama win the election: the Employment Non-Discrimination Act, which would prohibit discrimination against gays; the Defense of Marriage Act, which limits marriage to heterosexual couples; and Don’t Ask, Don’t Tell, which prohibits openly gay men and women from serving in the military.

Frank predicted that in an Obama first term, the first two will be enacted, and the third will be repealed. Gays, he observed “want to get married, get a job, and join the army. Now what kind of radical agenda is that?”