Up to the Test

Brenna Hogue is a California girl living a dream, a dream that became particularly vivid on Sunday, September 14, when the women's soccer team took on UCLA at the UConn Classic. 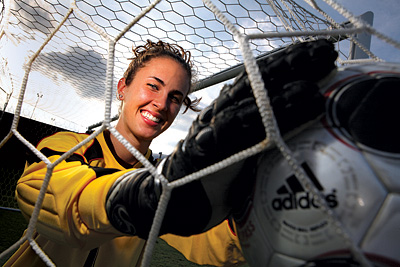 Scott Kingsley
A neuroscience concentrator, Hogue plans a career in medicine after graduation.

Hogue, the Bears’ goalie, grew up in the San Francisco Bay Area, but over the summer she’d taken classes at UCLA. While working out there, she had a chance to watch some of the UCLA players training.

When the Bears and Bruins squared off in September, UCLA was ranked first in the nation. “It was nerve-wracking,” Hogue says. “There was a lot riding on it. I really wanted to do well for my team.”

Did she ever. Hogue stonewalled the Bruins for 110 minutes while her parents and twin sister, Claire—a UCLA student—watched from the stands.

Although the Bruins outshot the Bears thirty-four to seven and held a twelve-to-three advantage in shots on goal, the game ended in a 0–0 tie. The Bears’ performance served notice that Brown women’s soccer was a player on the national scene once again.

“I’ve never been happier with a tie in my life,” Hogue says. “We played the number-one team in the country, and we didn’t lose. Everyone thought we were going to get blown away, especially after watching UConn, which is a pretty solid team, get handled by them, 3–0.”

The game came during one of the best weekends since 1994, when Brown defeated fourth-ranked Duke, 1–0, on Stevenson Field. Two days earlier, Hogue had helped blank eleventh-ranked Penn State. Sarah Hebert-Seropian ’12 had scored in overtime, resulting in a dramatic 1–0 upset of the Nittany Lions.
“It was great,” Hogue says, “for the program to show the country that just because we’re an Ivy League team and we might have different academic commitments, we can still compete with all the scholarship schools. It’s something to tell your kids about.”

Head Coach Phil Pincince agrees.“It was a big-time challenge for them and they stepped up to the plate,” he says. “Our game plan against Penn State was carried out to a T. When you are in a big game like that—if you can stay in it, you can win it. And that is exactly what happened.”
Hogue recorded a career-high eighteen saves against Penn State and compiled another twelve versus UCLA. She was named the tournament’s MVP.

“Brenna came up big time,” says Pincince. “I’m not just talking about routine saves. I’m talking about game-winning saves. That’s the makings of a strong goalkeeper. She can not only make the routine saves, she can win a game for you. That is what Brenna has been doing all year.”

A year ago, all of this success wouldn’t have been possible for Hogue. After an outstanding rookie campaign in 2006, she dislocated her kneecap three days before the start of her sophomore season. Classmate Steffi Yellin ’10, part of what Pincince calls the “dynamic duo” in goal, stepped in to fill the void.

Although the rest and rehabilitation are tough on any athlete, Hogue has come back with a vengeance to reclaim her starting spot in the net. “It is great to be back on the field doing what I love,” she says.

“She is mentally tough,” adds Pincince. “She embraces pressure situations and doesn’t tighten up. The bigger the game, the better she plays. She accepts challenges.”

Hogue has large academic aspirations as well. A neuroscience concentrator, she hopes to pursue a career in medicine after graduation.

Reader Responses to Up to the Test