"No one wants a fella with a social disease!" sang Riff, the leader of the Jets in West Side Story. Lyricist Steven Sondheim may not have known it, but his song Gee, Officer Krupke owed much of its logic to criminologist Lloyd E. Ohlin, who died December 6, at age 90, in Santa Barbara, Calif. 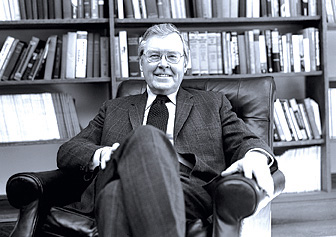 In the 1950s, youthful irresponsibility was commonly blamed for the growth of street gangs like the Jets and the Sharks. But in the classic 1960 study Delinquency and Opportunity: A Theory of Delinquent Gangs, Lloyd Ohlin and Richard A. Cloward challenged that idea. Poverty and the lack of opportunities for escaping it were the real problem, they argued, and the American Dream only exacerbated those frustrations.

"The myth of log-cabin-to-president and city-street-to-bank-president is deeply ingrained in us," Ohlin told the New York Post in 1961. "The trouble comes with the break between aspirations and opportunities. When we lead people to aspire to higher and higher standards and then fail to produce opportunities, they are left with a sense of having been denied and they often become delinquents." Ohlin helped plan Manhattan's Mobilization for Youth, an antipoverty program that became a model for federal efforts in the 1960s.

Ohlin was born in Belmont, Mass., where his family ran a chain of local bakeries. He graduated from Brown in 1940, then married Helen Hunter '41, the daughter of psychology professor Walter S. Hunter. Both Ohlin and Hunter served in World War II: he in U.S. Army counterintelligence, and she with the WAVES in Hawaii. Later, during the Korean War, he consulted for the Army.

Lloyd Ohlin earned his master's degree at Indiana Univ. in 1942 and his doctorate at the Univ. of Chicago in 1954—both in sociology. He made his mark, though, in the field of criminology, crossing the discipline of law with the social sciences. He conducted research at the Illinois Parole and Pardon Board and at the Univ. of Chicago's Center for Education and Research.

He taught at Columbia's New York School of Social Work before becoming the second nonlawyer to join the Harvard Law School faculty; he taught there from 1967 until his retirement in 1982 as the Touroff-Glueck Professor of Criminal Justice, Emeritus. He chaired the American Society of Criminology, among many other professional accomplishments and honors.

At several points in his career, Ohlin took leaves from academia to serve on presidential commissions. He consulted on delinquency for the Department of Health, Education, and Welfare under John F. Kennedy; was an associate director of Lyndon Johnson's Commission on Law Enforcement and Administration of Justice; and was among the 21 members of Jimmy Carter's National Institute of Law Enforcement and Criminal Justice.

A serious sailor, Ohlin spent summers with his wife cruising the coast of Maine. His wife died in 1990, and two sons also predeceased him. In 1993, he married Elaine Cressey, who survives him, as do his daughters, Heather Ohlin '79 and Janet McCandless '70; a brother; and five step-grandchildren.