A Chip on Their Shoulders

He is a quiet leader. If you passed him on the College Green, he'd look more like a lost freshman than one of the top two or three lacrosse goalies in the country. 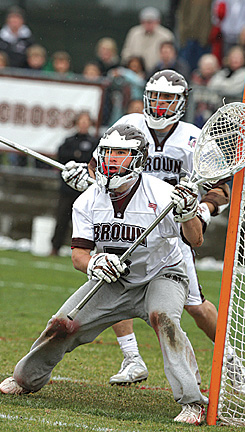 David Silverman
Goalie Jordan Burke ’09 and his teammates are out for revenge after narrowly missing a bid to the NCAA tournament last season.

A second team All-American and the Ivy League Player of the Year last season, Jordan Burke '09 was a major reason the men's team captured a share of the 2008 Ivy title. This season, Inside Lacrosse magazine tabbed Burke as a first-team preseason All-American. He's happy to accept the honor, but he also has some unfinished business he'd rather focus on.

Although the Bears were Ivy League cochampions with Cornell last season, the team was passed over for the NCAA tournament. Because Big Red had defeated the Bears during the season, on selection Sunday it was the team that received the league's automatic bid to the sixteen-team NCAA Tournament.

"I've never been told, 'Congratulations, I'm sorry' so much in the same sentence in my life," says head coach Lars Tiffany of Burke's reaction to the news.

As a result, getting into the NCAA tourney has become Burke's main priority this season. "We've got a chip on our shoulders because of how our season ended last year," Burke says. "I'm going to do whatever I can to get us there."

"There is a fire, a pain, that we need to address," Tiffany says. "We still have that fire, that passion. We still have a lot to prove."

This year, the expectations are higher and the pressure more intense, but Tiffany believes he has the perfect man between the pipes to settle his team down. "Jordan loves the pressure," he says. "He wants the game to rest on his shoulders."

Last season, Burke led all Division I goalies in save percentage (.674). In goals-against average, he led all Ivy League goalies and was second in the country with a 6.43. Those totals helped him earn New England Player of the Year honors and become a finalist for the Tewaaraton Trophy, an award given to the nation's top lacrosse player, just as the Heisman is awarded to the top football player.

Despite all of the individual accolades, though, Burke believes his biggest thrill was winning the Princeton game, 6–5, on May 3 to help his teammates gain a share of the Ivy title. The memory of his teammates running onto the field as the buzzer sounded is an image now burned into his brain.

"Winning an Ivy League championship is something that you never forget," Tiffany says. "You always have it, and you share it with thirty-seven other men."

What made the championship particularly sweet for Burke is that he had suffered through a disappointing freshman season and was now reaping the rewards of Coach Tiffany's rebuilding process.

Of course, Burke's temperament and mental approach are keys to Tiffany's rebuilding efforts. "There are a lot of skilled goalies," Burke says, "and it is hard to say one goalie is more skilled than another, but where I succeed is, I remain calm. Things don't always go your way at all times, but if you remain calm, eventually it will turn around."

Tiffany agrees. "Jordan is superb in his mental and emotional approach to the game." Of course, it helps to have the physical skills, too. "He has amazing reflexes and reaction time," Tiffany adds.

One of four captains for the Bears this season, Burke sets the tone for the team with his play on the field.

"To know that all the hard work that year paid off, and we won an Ivy League championship," Burke says, "that was pretty big, especially after my freshman year, when we were 2–11. To experience that turnaround, is even more monumental."

Fortunately, in front of Burke this season are many of last year's key players, including attackman Thomas Muldoon '10, a preseason honorable mention All-American. Brown should contend again in the Ivy League and be a factor when selections are announced for the NCAA Tournament. This year, the team hopes to be playing well into May.

"We want to build on our success from last year, and we have the capability of doing that," Burke says.

Reader Responses to A Chip on Their Shoulders