As a collegiate softball player, Michelle Moses '09 seems to have it all. In December 2007, she was the winning pitcher when the U.S.A. took the gold medal at an international Maccabi competition—so-called because the players are all Jewish—against teams from Israel and Argentina. She's also been selected to pitch for the U.S.A. team in July at the 18th Maccabiah Games, the "Jewish Olympics" that are held in Israel every four years and make up the third-largest international sports competition in the world. 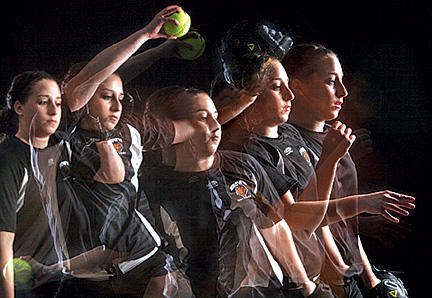 Scott Kingsley
If the women's softball team hopes to move up in the Ivy standings this year, the arm motion of Michelle Moses will be key.
In addition, Moses is an Academic All-American and a commerce, organizations, and entrepreneurship concentrator with a 4.0 grade point average. She was, in fact, the only Ivy Leaguer to make the first, second or third Academic All-America softball teams.

But success for the Brown softball team during her four years at Brown has been more difficult to come by. This season, her final campaign, she hopes to lead the Bears to at least the top half of the Ivy League. "Having had the success with the Maccabi team," says head coach DeeDee Enabenter-Omidiji, "she knows how to win. She knows what it takes to win. She is going to be one of the leaders in taking us to that next level."

Moses says playing for the Maccabi USA open women's softball team was a turning point. "It was unlike any other team I had played on," she says. "We all just shared a special bond, Judaism, even though some people didn't practice at all and some were conservative Jews."

The team, she says, gathered in Miami for a single practice and then traveled to Argentina for the tournament: "We were there on a mission to win a gold medal, but it was so much more. It was a cultural experience."

Moses, who split the pitching duties with one other player during the tournament, shut out Argentina, 6–0, in the gold-medal game. After compiling a 3–0 record, earning a save, and scattering four hits over nineteen innings while allowing one unearned run and two walks, she was named the tournament's best pitcher. She struck out twenty-six and posted an earned run average of 0.00. The world games this summer, which will include the best Jewish athletes from more than fifty-four countries, will mark the end of her softball career. "It is going to be the capstone," Moses says. "I'm going to be retiring my cleats after this, so I hope to go out with a gold medal again."

Before that, however, Moses has her work cut out for her helping the Bears team move forward. Last season, the women compiled an 8–26 overall mark, with Moses accounting for six of the team's eight victories. Her 2.46 earned run average was the team's best, and her 113 strikeouts in 102.1 innings pitched was good enough for fourth in the Ivy League. "We're definitely looking to climb back up," she says. "We have the potential to be very competitive."

Kelsey Wilson '09, the only other senior on the team, will be key on offense this season. Last year she led the team with a .333 batting average, sixteen runs batted in, and a .469 slugging percentage. Ultimately, though, in softball it comes down to pitching.

"Michelle is a big key for us," Enabenter-Omidiji says. "I don't think she is shying away from that, and that is what I'm excited about. She is a huge part of the success that we anticipate."

Gordon Morton '93 is the author of Brown University Athletics: From the Bruins to the Bears.

Reader Responses to Pitching In