Abraham Lincoln's 200th birthday was noted at Brown with, among other things, an exhibition of the trove of Lincoln documents and memorabilia housed at the John Hay Library. The collection originated eighty-six years ago with a donation from John D. Rockefeller Jr., Class of 1897, and has grown to become one of the five largest collections of Lincoln material in the world. 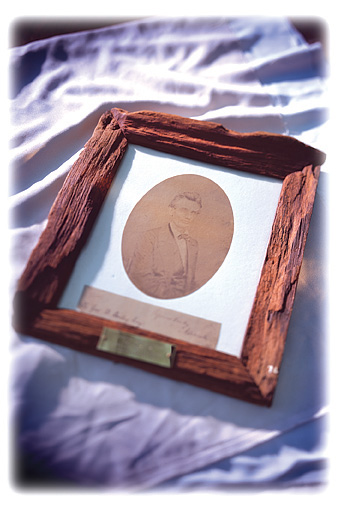 Among the items on display was this autographed ambrotype image of Lincoln on a pane of glass that was likely given to an admirer in 1860. What makes the portrait unique is the frame, whose roughly hewn parts are said to have been shaped from rails Lincoln split himself.

Though the claim is impossible to verify, Lincoln was a renowned rail splitter in the popular media. He once said that as a child he'd helped cut the logs that were used to build his family's cabin in Indiana. It's possible, in fact, that the wood on the frame could have come from the fence or the house itself.

In February a postage stamp was issued depicting Lincoln as a rail splitter, a job he held as a young adult. At the 1860 Illinois State Republican Convention, supporters held up placards that read, "Abraham Lincoln, the Rail Candidate for President," which earned him the nickname Rail Splitter. It helped cement his reputation as a common man from the Western frontier.