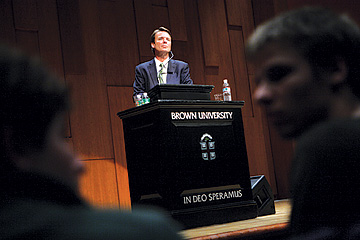 Former Democratic presidential candidate John Edwards is now stumping for the poor. Invited to Brown by the student lecture board March 10, he cut short his reminiscences of the campaign trail to talk about poverty at home and abroad. He described an American single mom unable to heat her home and a New Delhi classroom in which children crowded on blankets spread over a broken concrete floor. "We need to show a little backbone and guts," he said. "Somebody needs to speak for these folks, somebody, because nobody speaks for them." The global population explosion has strained resources in poor countries, fostering instability and terrorism, he said, blaming the Bush administration for its neglect. "It's like putting your hands over your eyes or sticking your head in the sand," Edwards said. "Completely irresponsible." Edwards had been scheduled to come to campus last fall, but he cancelled after admitting to an extramarital affair.
What do you think?
See what other readers are saying about this article and add your voice.