One year ago, I wore the traditional long white physician's coat to begin my workdays in a U.S. Navy ophthalmology clinic. Today, I wear a flame-resistant military uniform, forty pounds of body armor, a protective balaclava and gloves, a Kevlar helmet, and ballistic-grade goggles. After I insert a magazine of 9mm ammunition into my M-9 pistol, I climb into an armored SUV to travel through Kabul to one of the clinics where I serve as a physician mentor for the Afghan army medical corps. 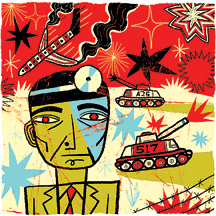 Nate Williams
Like all of Afghanistan, Kabul is dangerous. Since I arrived here in March 2008, attacks have killed two soldiers from my base, and a couple of times nearby rocket blasts have awakened me at night. Last July, the walls of my office shook when a massive bomb snuffed out dozens of lives and destroyed much of the city block in front of the nearby Indian Embassy. In January a suicide bomber detonated his carload of explosives against the perimeter wall of my base.

A friend recently asked if I am ever frightened here. Before my deployment I completed a three-week program designed to familiarize physicians with weapons and survival procedures. But no amount of training can prepare you for the realization that everywhere you go, someone eager to kill you may lurk.

Strangely, my anxiety did not last long; in fact I now battle complacency when I travel throughout Afghanistan. The armor we in the U.S. military wear usually does its job. I have seen the wreckage of vehicles grotesquely distorted by explosions from which passengers escaped with only minor injuries. When I travel in a Humvee, I ride assured that a suicide bomber could detonate his explosives just inches from my door and the vehicle's armor would likely protect me.

I am no braver than the average person; I just sublimate my fear in order to do my job. The parts of Afghanistan where I have traveled have not seen the sustained violence that has plagued more restive provinces in the south and along the Pakistani border. Stray insurgent rockets and roadside explosives regularly spook Kabul, but it's usually local Afghans who absorb the brunt of the terror. A few months ago, a bomb aimed at a military vehicle literally vaporized several children walking home from school.

To live here, people must adapt, both psychologically and socially, to ubiquitous danger and the fear it can induce. The Afghans who assist me as interpreters try to keep their work secret, lest local insurgents target them or their families for helping foreign forces. The threat is so immediate that a U.S. visa program exists to assist those who must leave their homeland to ensure their survival. I recently met with a local mullah known as a fierce opponent of the Taliban to discuss the construction of a medical clinic for his tribe; shortly after our meeting insurgents attacked his vehicle on the streets of Kabul.

Soon after my arrival here, the danger that is a reality for every resident of Afghanistan lost its power to disturb my consciousness. The cruel reality is that this war, like all wars, claims lives. Military personnel and civilians alike perish when they are caught in a bomb's blast zone. My colleagues and I agree that bad luck is the primary determining factor for most of the deaths here. Afghans would say, Inshallah: If God wills your death, then it will happen. We Americans generally dress to protect ourselves, adhere to proper military and safety protocols, and hope for the best.

A Navy physician for the past ten years, Ronald Willy wrote this essay while serving a twelve-month deployment to Afghanistan. He returned to the United States in February.

Reader Responses to Dressed for Danger