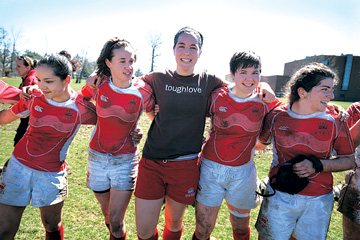 Photos by Scott Kingsley
Although the women's rugby team appeared happy after winning its third Ivy championship in three years on April 5, the women were still not satisfied. "We could have hit harder," said captain Whitney Brown '09, pictured second from left. The team wanted a national title, but Stanford denied them, 31–12, in the semifinal match in Palo Alto on May 1. (Stanford then fell to Penn State in the finals.)

WEB EXCLUSIVE - additional photos from the match with Dartmouth: