Remember the joke about the tourist who stops a New Yorker on the street to ask, "How do I get to Carnegie Hall?" 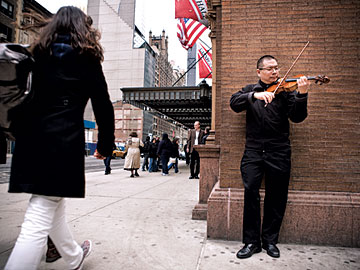 Calvin Lee did both.

On April 15, the fabled concert hall hosted the world premiere of the YouTube Symphony Orchestra, whose ninety-six members had auditioned and rehearsed on the Internet. Among the violinists that night was Lee, a Modesto, California, surgeon and acupuncturist.

Last December, YouTube invited musicians from all over the world to upload auditions for what the company billed as the world's first "collaborative online orchestra." Lee says he practiced every day for two weeks to make an audition video, which he posted to his YouTube channel, RisingPianoFire. It's a straightforward video, with no fade ins or fancy editing. There's just Lee, in a black turtleneck, in a white room, with his violin. He presses "record" on the camera, takes a deep breath, and makes music. Thirty-second notes bounce off the walls and climb up your spine. His audition has now been viewed 13,000 times, and he has also posted scores of other videos demonstrating his prodigious talent at the piano.

YouTube received more than 3,000 audition videos, from amateurs and professionals. Entrants played two songs, the first from a handful of exceedingly difficult classical pieces (Lee played the Presto from Bach's Violin Sonata in G minor), and the second was Internet Symphony No. 1, Eroica, written by Chinese composer Tan Dun and specially arranged for this occasion. The entries were whittled down first by members of the London Symphony Orchestra, then by YouTube voters, and finally by Thomas, the music director of the San Francisco Symphony and the YouTube Symphony's artistic director.

In February, when the concert organizers phoned Lee's office to tell him he had been selected, the receptionists dismissed the call as a joke. "They basically said, 'Doctor's not in. If he's interested, he'll call you back,'" Lee recalls. "Later they said, 'Oh, we got this prank phone call from Google [which owns YouTube]; we just hung up on them.' I said, 'You hung up on them?!'"

In the weeks leading up to the YouTube performance, Thomas rehearsed the orchestra online. He posted videos in which he explained what he wanted from each instrument part and San Francisco Symphony musicians demonstrated what he meant. "Because he actually conducted virtually, I felt like I had played for him before," Lee said. In mid-April, the entire orchestra gathered in New York City for a whirlwind three days of rehearsals and master classes, culminating in the Carnegie Hall concert. "For us it's been somewhere between a kind of classical music summit conference and a [Boy] Scout jamboree," Thomas said. "With an element of speed dating thrown in."

Unlike most of his colleagues on the stage at Carnegie Hall, Lee is not a professional musician. He studied both piano and violin as a child, and performed in the Brown University Orchestra while concentrating in neural studies. He served as concertmaster during his senior year, and twice won the orchestra's concerto competition.

Then came medical school, also at Brown. "In med school, I basically practiced about zero to one hour a month," he says. "In residency, it became zero to one hour per year." Still, he says, playing music "completes me as a person. Plus, if it becomes a technical challenge, that complements my surgical dexterity. It's another way to keep my fingers more nimble."