Wearing one of her typically casual but sophisticated dresses, Los Angeles designer 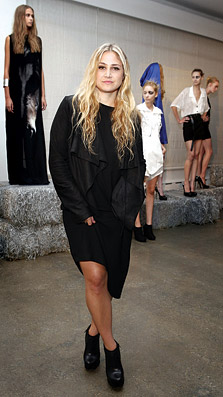 Kimberly Ovitz '05 strikes a pose at her New York Fashion Week debut September 16. Behind her, models showcase Ovitz's spring 2010 collection, inspired, she said, by architect Frank Gehry's minimalism and the ideals of Buddhist monks. The lofty hybrid "could have been an unrealistic goal for such a young designer," pronounced the fashion tsars at WWD.com, but Ovitz "created a well-executed collection with chic silver leathers, wrap dresses, and more casual fare such as a white seersucker shorts and a jacket paired with a nude tank." Ovitz launched her line in 2009, heavily influenced by her love of riding and equestrian style. Her Fashion Week presentation drew a star-studded crowd that included Vogue's Anna Wintour and movie director Martin Scorsese.