First came the cows. "I did a ton of paintings with cows. The cow was my protagonist," Alex Weinstein says wryly of the landscape paintings he made in Pont-Aven, Brittany, in the first few years after he graduated from Brown. He quit the cows in 1997, moved to Venice Beach, California, and for the past twelve years he's been depicting a new protagonist—water. 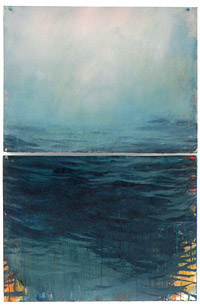 Switching subject matter marked a breakthrough in Weinstein's artistic and professional development, and he credits visual-arts professor Wendy Edwards with sparking the change. Weinstein, who grew up in Rhode Island, had been passionate about surfing ever since he took it up at age thirteen, but he shied away from integrating surfing into his art. He comes from a cultured and erudite family—his father is Arnold Weinstein, Brown's Richard and Edna Salomon Professor of Comparative Literature—and surfer art seemed déclassé. But in 1997 Alex showed some of his landscapes to Edwards, a family friend. "The paintings didn't have the life I know he experienced in the water,"she says. "I told him he needed to focus on the things he loved."

Edwards says she and Weinstein's parents urged him to pursue an MFA, but he chose not to go. "His real community is based in L.A.," Edwards says, "among other surfers." In Venice Beach, Weinstein felt freed of the self-consciousness that had dogged him in France, where he says, "No matter how good my accent became, or how well people knew me, I was always 'The American.' In Venice, you could walk outside with your clothes on fire and nobody would notice."

Plus, there was the ocean; his apartment had an unobstructed view of the Pacific. "This gigantic, always moving, always changing character," he says. "It was a huge wellspring of stimulation." He started making enormous abstract paintings that viscerally capture the way the water looks and feels from the vantage point of a surfboard.

For more than a decade the Pacific has continued to inspire Weinstein, who has tracked its moods with oil paints. His images are graphically simple—the only structural element may be a horizon line—but their energy is intense. "I'm not interested in making pictures of crashing waves, or sunsets over water, or people in water, or sharks in water," he says. "But there is a subjective element. I want to communicate the surfer's experience of jumping in the water. It's all around you. You feel your breathing and the pressure all around you. It's absolutely solitary."

One of Weinstein's artistic heroes is Mark Rothko, whose rigidly abstract canvases of rectangles and squares are impassioned with color. Weinstein admires his marriage of bloodless structure with warm-blooded, soulful color. "Rothko, for me, is the ultimate romantic: stern but full of poetry," Weinstein says. Another favorite is Brice Marden. "His paint—it may be Air Force gray but you want to eat it," Weinstein says.

Weinstein's career received a huge bump when Elle Décor featured one of his canvases prominently in a feature on the apartment of Thom Filicia, the "design doctor" of Bravo's Queer Eye for the Straight Guy. Last fall Weinstein had a solo show at the William Turner Gallery in Santa Monica, California. Recently he has been making sculptures inspired by the idea of ice fishermen cutting blocks of ice from the surface of lakes. He began thinking about what a slab of the ocean would look like, and he created wavy fiberglass tiles and rearranged them like jumbled-up jigsaw pieces. "It's 50 percent high concept and 50 percent heartbeat," he says. "Like Rothko."