Only twenty books are nominated for National Book Awards annually, and this year two of them were written by Brown authors, one a professor and one an alumna. 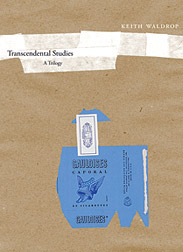 Transcendental Studies: A Trilogy, a book of poems by Professor of Literary Arts Keith Waldrop, not only was nominated, it won the poetry prize. "This compelling selection of recent work," the judges noted, uses "quasi-abstract, experimental lines, collaged words torn from their contexts" to take on new meanings. "These powerful poems, at once metaphysical and personal, reconcile Waldrop's romantic tendencies with formal experimentation, uniting poetry and philosophy and revealing him as a transcendentalist for the new millennium."

Waldrop joined Brown's faculty in 1968, and his first book, A Windmill Near Calvary, was a finalist for the 1969 National Book Award. In addition to teaching in the literary arts department, he is the Brooke Russell Astor Professor of Humanities. He has published more than a dozen works of poetry and has translated the work of Claude Royet-Journoud, Anne-Marie Albiach, and Edmond Jabès, among others.

Deborah Heiligman '80 was one of the five finalists in the Young People's Literature category for Charles and Emma: The Darwins' Leap of Faith, a biography that focuses on the scientist's relationship with his beloved wife, whose religious devotion made him keenly aware of the reception his developing theory of evolution would likely meet. The book, the judges wrote, "is a portrait of a brilliant man, a radical science, and a great love." Heiligman, a religious studies concentrator at Brown, has written twenty-five books for young people, many of them about science or religion.
What do you think?
See what other readers are saying about this article and add your voice.

Reader Responses to Read These Books