Think president obama is having a hard time selling his health-care plan to Congress? Try selling a last-place major league baseball team that has announced it's leaving town to build a stadium somewhere else. 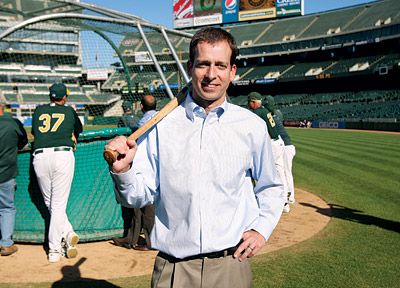 Michael Zagaris/Oakland Athletics
Jim Leahy's challenge is to fill McAfee Stadium.
That's the challenge facing Jim Leahey, vice president of sales and marketing for the Oakland Athletics. The A's, who finished dead last in the American League western division this season, twenty-two games out of first place, is scouting for a new home after a deal fell apart that would have moved the team to nearby Fremont and into a "baseball village" that would have included residential housing, restaurants, and retail shops. Fans now ask themselves: Why go see a team that doesn't even want to be here?

"It's challenging to create a marketing plan when the team's in a state of limbo," says Leahey, who heads a thirty-five-person staff overseeing the A's advertising efforts, ticket sales, luxury-suite sales, corporate sponsorships, and merchandising. He also decides which players get to be models for bobblehead dolls given away during special promotions.

"We want to stay in the San Francisco Bay area," Leahey says. Just where in the San Francisco Bay area is still a mystery, which is why he has organized several databases to help him quickly begin seeking replacement corporate sponsorships and new ticket buyers once the team's new home is determined. Meanwhile, he's working on keeping as many of the old fans as happy as possible, in the hope they might be willing to drive occasionally to the A's new home.

Bolstering the team's shrinking fan base hasn't been easy. Two years ago, the team sold 1.92 million tickets, while this season—the third in a row in which the A's lost more games than they won—the number was more like 1.4 million. Leahey has implemented special days to boost attendance. One of the more memorable was Dog Day, during which a section of the stadium was reserved for pet owners and their pooches. It worked: the afternoon featured plenty of pre-game pet tricks, and the game was a sellout.

Haircut Night, where fans willing to get buzz cuts outside the stadium got in free, was even wackier. "Some fans don't care about winning," Leahey says. "They want to have fun at the ballpark. The minor leagues are famous for doing wacky things like Potato Night and Disco Demolition Night, but we're a professional baseball team, and we won't do anything to cheapen the product."

Besides, he adds, there's a serious side to team promotions. At Breast Cancer Survivor Day, anyone who had been touched by the disease was invited onto the field before the game to join hands and make a big pink ribbon. "That was a very touching moment," he says.

Leahey, a native of Warwick, Rhode Island, grew up a Boston Red Sox fan. But his career has not centered primarily on baseball. An organizational behavior and economics concentrator at Brown, he has an MBA from Harvard. He has worked with Special Olympics and still supports an orphanage in Peru that he got to know while he ran Sony Peru for Sony Corporation, the job he had before he joined the A's in 2006.

Leahey hopes the A's can return to their winning ways soon. That would certainly make his job easier. In the meantime, there's the matter of cleaning up after Dog Day. "We hired a company to clean up after the dogs," Leahey says with a laugh. "Thankfully, that wasn't part of my job description."

Reader Responses to Selling It