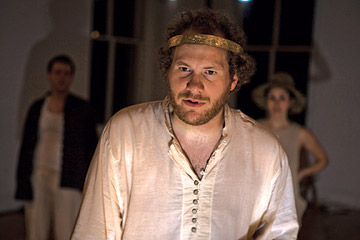 Henning Peter Fischer
Andy Grotelueschen in a scene from Fiasco's Cymbeline.
In 2007, Noah Brody and two friends from the Brown–Trinity Repertory Company graduate theater program, formed New York City's Fiasco Theater Company as a labor of love, if not lucre. They produced a handful of readings and weekend-long productions with a heavy emphasis on Shakespeare: The Two Gentlemen of Verona, Twelfth Night, and an evening of the Bard and Duke Ellington called Such Sweet Thunder.

This fall the group learned that if Shakespeare can't be profitable, it can at least be popular. Fiasco's production of Cymbeline, its first large-scale project, has won it recognition as a serious player in the New York theater world.

At the beginning of the show's run the actors were playing to houses with as few as fifteen audience members. "We couldn't give tickets away," Brody says. Then the New York Times came calling. "Cymbeline may be nobody's favorite Shakespeare play," the reviewer wrote, "but Fiasco Theater is making it awfully lovable in a spunky production." Overnight, the house sold out, and the run was extended into November.

The show was spare in presentation but rich in creativity and talent. With little more than a trunk and a few chairs for a set, the six actors played more than a dozen characters. A single white sheet was, by turns, a bed sheet, a sail, and a toga. The "magic trunk," the centerpiece of the set (built by master carpenter Jacques Roy '07 MFA) served as a bed, a cave, a boat, a pool table, and a throne, among other things. All this shape shifting wasn't just funny and clever (though it was both); it built on the play's central themes of mistaken identity and the relationship between seeing and believing.

The bare-bones set was born of both practical and philosophical considerations. One of the core values the friends learned at Brown is that, as cofounder Jessie Austrian '06 MFA says, "You only need a great text, great actors, and an audience to make good theater. If you've got a couple of cubes and some talented performers, you've got a play." From Fiasco's start, Brody, Austrian, and Ben Steinfeld wanted to develop a repertory company in the classical sense, and to do so they enlisted former Brown classmates Paul L. Coffey, Andy Grotelueschen, and Emily Young. "Shakespeare was writing for people that he knew," Brody says. Unlike regional theaters, which "plug into a production actors who don't know each other, don't know the theater, don't know the community," he says, Fiasco works "as a family."

This approach works especially well because "part of the training at the [Brown–Trinity Rep] MFA program teaches that there shouldn't be so much of a difference between actor, writer, and director," Brody says. "We should be able to perform all of those jobs." He and Steinfeld both directed and acted in Cymbeline; with Austrian they spent months parsing Shakespeare's text and deciding what to cut and what to include.

In a city where the price of a theater ticket routinely exceeds $100, at this fall's production of Cymbeline the most expensive seat in the house cost $18. Fiasco members call this "flipping the economic equation": rather than following the prevailing model of high ticket prices and low actors' pay, they aim to keep ticket prices low and pay a living wage. That same thinking underlies the company's Free Training Initiative, which offered a dozen young actors the opportunity to study acting and directing with the company last winter. "If you're willing to donate your time, your energy, and your art," says Brody, "we will pay for everything else."

Fiasco members know it's risky to rely on donations and grants to fund their work, but they can't imagine another way. "We always feel priced out of the market," says Brody. At a time when actors can't afford to go see plays, he says, he and his cofounders asked themselves, "Are we going to become that same thing?"

In November, Fiasco is doing a workshop production of The Vexed Question, a sprawling play Brody has written about the abolition of slavery. They're also planning a classical theater festival. They haven't quite figured out their identity as a company. Will they be known for Shakespeare? For their stripped-down aesthetic? "We're sort of making it up as we go along," Brody says, but, as the company says in its mission statement, "Only when artists are brave enough to risk a fiasco can they create the possibility of something special."

Reader Responses to Shakespeare for Everyone