A Starter in Spirit

When she sat on the end of the women's basketball bench during her playing days, Lindsay Gottlieb '99 knew that if she was ever going to make it to the Final Four or the WNBA, she wouldn't do it as a player. So she became a coach. 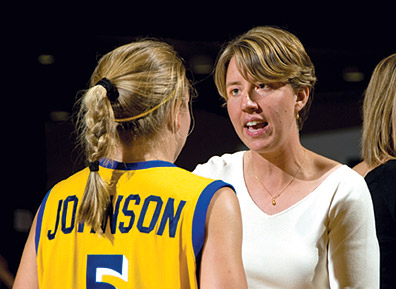 Tony J. Mastres/USCB
Gottlieb, now the UC Santa Barbara coach, has been directing players from the bench since her playing days at Brown.
Although she has yet to make it to the Final Four, Gottlieb has become a winner. Last year, after she became head coach at UC Santa Barbara, her Gauchos went on to win their second consecutive Big West title, their eleventh in thirteen years. "It was like a storybook ending," she says. "Watching those kids cut down the nets and celebrate, I really could not have asked for anything more." Gottlieb was named Big West Coach of the Year.

Gottlieb had a tough act to follow at Santa Barbara. She replaced the legendary Mark French, who had amassed more than 400 wins there. At the start of Gottlieb's rookie season as head coach, the Gauchos were picked second in the preseason and by Christmas break were struggling to a 3–6 start.

"I had to do some serious soul searching and looking in the mirror and saying, 'Are we doing the right things?' Ultimately," Gottlieb says, "that is what I did over Christmas. I said, 'I need to believe in my process and what we are doing.'" Her team rallied to win the next ten games, ending the season with a 22–10 record, the Big West title, and a spot in the NCAA tournament.

This year might be tougher, although despite losing four starters and five seniors, the Gauchos have been picked to win the Big West for the third straight year. Now Gottlieb must guide a much younger and inexperienced team through her sophomore season.

It was during her junior year at Brown that Gottlieb first decided to become a coach. Even then, her teammates knew her as "Coachie," because she always knew where everyone was supposed to be on the floor and liked to discuss strategy while sitting on the bench.

"I was a pretty good shooter," Gottlieb recalls, "and I put a lot of time in to control the things I could control. I think I hold a lot of the practice shot records. I think I was pretty smart, so I knew what should be done, whether or not I had the athleticism to do it." 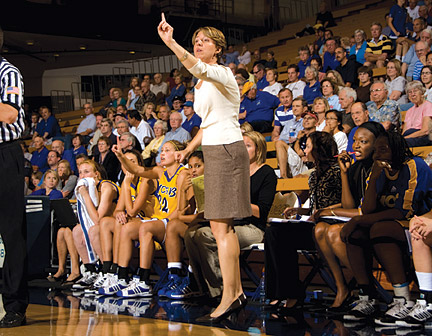 "She just really understood the game and what was going on," says former teammate Julie Amato '99. "I often made it a point to sit right next to her when I came out of a game, because I was always wanting to know what she thought—something that we could do differently or better."

As the fifteenth player on some successful teams in the late 1990s, Gottlieb didn't let her lack of playing time detract from her experience. She draws upon those experiences today as a head coach. "I think about my time at Brown when I wasn't playing," she says. "I was still learning from my coaches, and I was still enjoying my teammates, and I was still being challenged everyday. I call upon those things all the time."

Vita Redding '99, the leading scorer on many of those teams and the all-time leading scorer in Brown women's basketball history, recalls Gottlieb as a personable and caring teammate. "She was a 'starter in spirit,'" Redding says. "I don't ever recall her having an attitude that her role on the squad was of any less significance simply because she was not on the floor. She was always rooting everyone on, encouraging everyone. She knew how to communicate off the floor, and actually cared about us as individuals, not simply as teammates."

Gottlieb did get her one night playing in the spotlight. She started on Senior Night, according to tradition, and she didn't disappoint. Her teammates fed her the ball early and often, and she knocked down several shots at the beginning of the game en route to a career high. "Senior Night was pretty cool," she says. "My roommate sang the national anthem. I remember Professor [of American History Howard] Chudacoff with my dad, standing up and cheering in the stands because I think they understood it was such an important moment."

After graduating, Gottlieb worked as an assistant coach at Syracuse, New Hampshire, Richmond, and Cal. With head coach Joanne Boyle she led the Richmond Spiders to three consecutive twenty-win seasons before the pair moved on to a rebuilding job at Cal. During her time there, the Cal team went from eighth in the Pac-10 to eighth in the country and enjoyed three consecutive twenty-win seasons and three trips to the NCAA Tournament.

"There is no way I could have built either of these programs without her," Boyle says. "She was my right-hand person, and helped me in so many ways."

Brown is still with Gottlieb, who has long been known for her cerebral approach to the game. Recently she received some good-natured ribbing from her assistants for bringing in a magazine on which she had sketched some new plays. She had been up late reading it, when the idea for the plays struck her.

"Too tired to get up and grab my notebook," she says, "I ended up writing the notes and diagrams on the back of the BAM. I brought it into the office the next day, and my assistants were cracking up. 'Leave it to the Brown nerd to write on the back of her alumni magazine' is essentially what they were saying."

Reader Responses to A Starter in Spirit