"Really I cannot express the intensity of the bombardment which the Germans put over on us. It was a perfect hail of high explosive shells, falling round like rain. The ground rocked from the concussion, and the night was almost turned into day from the flash of those guns, spitting out their death dealing messages. 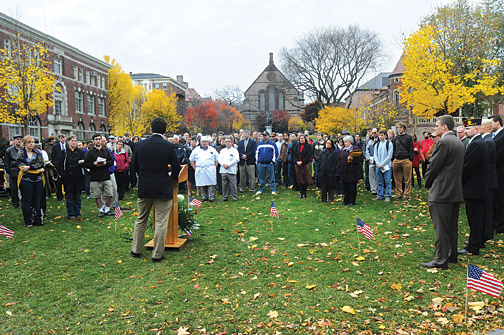 "This continued for eleven hours—but not for him. About six o'clock this same morning one of those high explosive shells fell in the trench where he was standing and—well the 'Kid' never knew what struck him.

"He was not afraid, and he died like a soldier, his face towards the enemy, performing his duty till the last; also he was not alone, for many a mother's son gave his life for his country that same memorial morning.

"If it is willed that I shall pay the supreme sacrifice, I hope that it will be in the same way, so there will be no suffering...."

Excerpt from a July 18, 1918, letter that first lieutenant Henry L. Griggs sent to Mrs. M.W. Berriman, whose son, second lieutenant George Berriman '20, had been recently killed in combat during World War I.

Reader Responses to The Supreme Sacrifice