In 2005, Terry Walsh was watching television at home with his wife in Atlanta when he happened upon a news report about the military's treatment of José Padilla, the so-called "dirty bomber," who was charged with plotting a radioactive-bomb attack on U.S. soil and declared an enemy combatant, despite his status as a U.S. citizen. 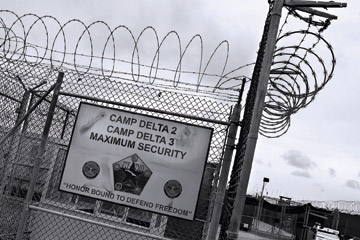 Chip Somodevilla/Getty Images
Camp 2 and Camp 3 detention facilities, Guantanamo.
"I started muttering to my wife that this was the worst thing I'd ever seen," Walsh says. He says he found himself thinking a few days later, "'You know, there is a moment in your life where you have to quit muttering and go do something.'" He signed up his firm, Alston and Bird, to represent four Guantánamo detainees.

And so in 2006 Walsh, despite a longtime fear of heights, found himself on a plane to Guantánamo. But instead of flying directly from the United States, he chose to go via Jamaica. Most of the planes flying to Guantánamo are twin-engine jet-propeller planes, which particularly aggravate his acrophobia. "I'd spent the last forty years of my life avoiding those," he says. Instead of flying four hours in such a plane from Fort Lauderdale, Florida, he figured he could stand it for an hour, the amount of time it takes to fly from Jamaica to Guantánamo.

He couldn't. As soon as the plane wheels lifted off the tarmac, he began to panic. Convinced he was going to die, he sat there, silently praying to God to save him.

But that didn't calm him either. So he took out a small picture of Vice President Dick Cheney that he kept tucked inside his wallet as a reminder of why he was on this plane in the first place. Cheney, after all, had been the lead proponent of turning a portion of the Guantánamo Naval Base into a detention center for prisoners picked up on the Afghan battlefields. And so Walsh rubbed the portrait between his thumb and forefinger, keeping his gaze fixed on Cheney's trademark smirk. As the rage rose inside him, he forgot about his fear of heights.

"I got angry, perked up a bit, and then, what do you know, I was in Guantánamo," Walsh says. He felt calm, yet more determined than ever to battle the Bush administration on behalf of his client.

Walsh still has four cases pending in Guantánamo, three of them Yemenis, and the fourth, a Tunisian. Walsh says the Tunisian, whose name he can't reveal because the case is sealed, was picked up by the CIA. "He was grabbed on the street, put on a plane, and the next thing he knew he was in Gitmo," says Walsh.

Although the Obama Administration ordered the man's release in June, Walsh says the Tunisian government by then had convicted his client on terrorism charges: "The evidence they used against him was that he was at Guantánamo, where he has never been charged." Walsh believes that if his client goes back to Tunisia, he will be tortured, so he has succeeded in obtaining a restraining order to stop the prisoner's release until another country agrees to host him. Until then, the man remains in prison.