The men's soccer program suffered a potential setback on January 5, when Mike Noonan, the head coach for the last fifteen years, announced he would be leaving for the top coaching job at Clemson. 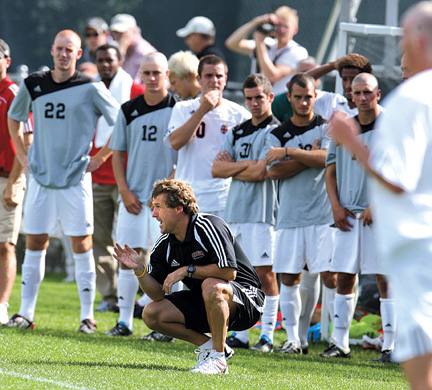 "Mike was simply the gold standard at Brown," Director of Athletics Mike Goldberger says. "Year in, year out, we knew that Coach Noonan would craft and coach a team that would not only compete for the Ivy championship, but would be competitive with any team in the nation."

Along the way Noonan coached five Ivy League Players of the Year, two Ivy League Rookies of the Year, thirty-six first-team All-Ivy players and four Academic All-Americans. A dozen of his players signed contracts with Major League Soccer teams, including current standouts Cory Gibbs '02 of the New England Revolution and Jeff Larentowicz '05 of the Colorado Rapids.

"He brought us some wonderful teams over the years," Goldberger says, "but more importantly he brought to Providence a wonderful group of men who thrived under his leadership. We are extremely grateful to Mike for being such a wonderful coach and educator."

Many of his former players agree. "The most important thing that Coach Noonan taught me was the pursuit of excellence and to always strive to be the best at whatever I was doing," says Adom Crew '04, a 2004 draftee of the Columbus Crew who still ranks in Brown's top ten for career goals. "As a player, he always pushed me to maximize my abilities, and ultimately helped me to learn the mental toughness and drive that sparked me not only within soccer, but also in my everyday life."

Brown felt Noonan's impact immediately after he arrived at Brown in the mid-1990s. He set a school record for wins with sixteen during the 1995 season, his first after arriving from UNH, where in 1994 he'd coached the Wildcats to their first NCAA soccer tournament. (They lost in the first round—to Brown.)

His success continued through his last season, when the Bears went 11–3–5 overall, including a 5–2 Ivy record. The team earned its seventh invitation to the NCAA tournament over the last ten years, falling to North Carolina in the second round. It would be Noonan's last game with the Bears.

For Noonan, however, the soccer program was about omore than wins and losses. It was ultimately about preparing his athletes for success away from the soccer field. "We were able to take young men and turn them into grown men through our program," he says, "and for me that is the most important thing. Having played in our program, they have taken a skill set with them that they have been able to use successfully in life. I think that is my greatest accomplishment."

On the field, Noonan's ultimate goal was to bring a national championship to Brown. His 1995 and 2000 squads advanced to the NCAA quarterfinals, or Elite Eight, but fell to Virginia and UConn, respectively.

"That remains the dream," Noonan says, "and I do believe that it can be accomplished at Brown. I want to be there watching and cheering, and hope it happens for them."

Gordon Morton '93 is the author of a book on the history of Brown athletics.

Reader Responses to Chasing the Dream