Scott "Woody" Woodworth '82 showed up on campus his freshman year wearing three-inch high boots, blue velour bell-bottom pants, and an unbuttoned matching shirt whose tails he tied together just above his belt buckle. 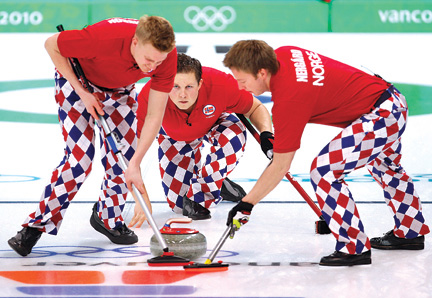 Alex Livesey/Getty Images
The Norwegian curling team's pants were the surprise fashion hit of the Olympics.
More than thirty years later Woodworth's taste for outlandish menswear became an international sensation when, this winter, the Norwegian Olympic Curling Team in Vancouver wore the Argyle-patterned red, white, and blue trousers he designed for his company, Loudmouth Golf. Then the pants hit Facebook when a curling aficionado in upstate New York—who loved how the new look livened up a sport known for its drab attire—created a fan page. Two weeks later, it had drawn more than 600,000 fans, including almost 200,000 Norwegians—about five percent of the country's population.

Woodworth, meanwhile, scrambled to keep up with the skyrocketing orders for the pants. After Matt Lauer wore them on NBC's Today show and reported how popular they'd become at the winter games, Woodworth's inventory of the so-called Dixie pants was quickly snatched up and traffic on his website crashed his server. Woodworth has since ordered a new run of fabric from his supplier, and he hopes to have another 15,000 pairs ready to ship by early April. "We are going to ride the mania as long as we can," Woodworth says. A portion of the sales will be donated to the Katie Beck Memorial Fund, which honors an aspiring curler who died at age 24.

Tony D'Orazio, who started the Facebook page, put up a link to Loudmouth Golf after contacting Woodworth by phone. "When I finally reached Woody, he was all business," D'Orazio says. "It seemed like he was caught a little off guard and was totally focused on keeping his business—and its image—going."

That image has been burnished over the past decade as Woodworth, a graphic designer who lives in Sonoma, California, with his wife, Cathy, and sons, Robert, 13, and Bailey, 14, turned his passion for audacious attire and brightly colored geometric designs into a men's clothing business targeting a particular subspecies of golfer. "Loudmouth guys may be a little obnoxious," he says, "but deep down they are good guys. You put those pants on, you are going out to tell jokes and have fun." 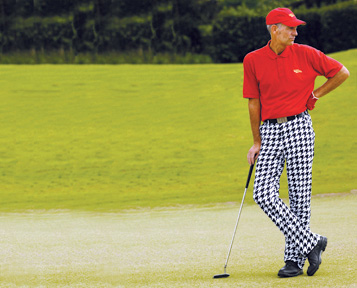 Courtesy Loudmouth Golf
Woodworth shows off another style of his Loudmouth Golf pants.
As a boy growing up in Cranston, Rhode Island, and as a young man strolling around campus, Woodworth saw firsthand the popularity of patchwork-plaid pants among preppy New Englanders. After he moved to California, he noticed that golfers there dressed in muted tones.

That would have to change. So in 2000 he went to a fabric store, bought a bolt of powder-blue stuff that depicted Bugs Bunny and Daffy Duck riding in golf carts, and had a local seamstress make him a pair of pants to wear at a charity golf tourney.

"They were horrible looking pants," he says, "and I loved them. Guys kept asking me all day where I got them."

He found a clothing manufacturer and ordered seventy-two pairs for his newly formed company, Loudmouth Golf. Six weeks after placing a classified ad in Golf Digest, he'd sold half his inventory. He doubled the next order, and before long he'd drafted his children into helping him pack merchandise from his garage. It was good-bye graphic design and hello clothing business.

By 2007 a couple of wealthy customers offered to invest in Loudmouth, bringing the company to a new level. Woodworth then designed matching sports jackets for those wanting to make an even louder statement over cocktails on the nineteenth hole. He opened warehouses in California and the United Kingdom. After the giant online golf retailer Golfsmith decided to carry his line, sales skyrocketed so fast two years ago that Loudmouth ran out of all sizes by June. The next year PGA golfer John Daly wore Loudmouth pants on tour. Woodworth just couldn't keep up with demand.

Then came the 2010 Olympics. After someone from the Norwegian curling team spotted pants in the country's national colors on the Loudmouth Pants website, the entire sporting world got an up-close-and-personal look. Now Woodworth has learned to expect the unexpected.

"Who knows what it will be next year? But it will be something," he predicts. "It will probably come out of the blue. And we'll be caught with our pants down again."